The coaster was named after the American Revolution in celebration of the country's Bicentennial. Unlike many of the previous looping roller coasters in the 19th and early-20th centuries which attempted circular loops, Revolution's success was dependent on a clothoid-shaped vertical loop – a first in the industry.

In 2016, the coaster received a makeover for its 40th anniversary that included new trains with lap bars and an optional virtual reality experience for riders. The New Revolution soft-launched to season pass holders on March 26, 2016, and opened to the general public on April 21, 2016.

In the mid-1970s, Magic Mountain enlisted ride manufacturer Anton Schwarzkopf and legendary designer Werner Stengel to design and build the first looping roller coaster in modern times. The last known existence of one was Loop the Loop at Coney Island during the early 1900s. Prior to Great American Revolution's opening, a week of testing was needed to properly calibrate the tightness of the wheels, in order to get the train to complete one full circuit. At the ride's opening, staff operating the ride were outfitted with Continental Army-style uniforms to match the time period of the American Revolution, which the country was celebrating for its Bicentennial.

In 1979 following the purchase of the park by Six Flags, the ride's name was changed to La Revolución in honor of the Mexican Revolution. In 1988, the ride's name was changed once more to simply Revolution. In June 2002, a Coaster Landmark plaque awarded by American Coaster Enthusiasts (ACE) was placed near the line queue in front of the ride. The award was presented in recognition of its accomplishment as the world's first modern vertical-looping roller coaster. In 2005, parts of Revolution had to be dismantled to make way for the park's new Tatsu roller coaster that was being constructed. Revolution reopened with Tatsu on the new coaster's media day on May 11, 2006.

On September 3, 2015, Six Flags announced that Revolution would be refurbished for the 2016 season marking the roller coaster's 40th anniversary. Its track was painted white and blue, and the ride received new red and white trains with the lead cars of each train featuring a silver eagle ornament mounted on the front. The new trains were also fitted with lap and calf bars; the elimination of the highly criticized over-the-shoulder restraints was intended to provide a smoother, more comfortable ride experience with additional airtime. The ride reopened with the name of The New Revolution. 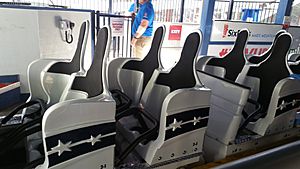 New seats on the New Revolution

Six Flags announced on March 3, 2016, that The New Revolution would be among several rides at various parks that would receive a virtual reality (VR) upgrade. Riders had the option to wear Samsung Gear VR headsets, powered by Oculus, to create a 360-degree, 3D experience while riding. The illusion was themed to a fighter jet, where riders flew through a futuristic city as co-pilots battling alien invaders. The feature debuted with the coaster when it emerged from refurbishment and reopened to season pass holders on March 26, 2016. It reopened to the general public on April 21, 2016.

On February 8, 2017, Six Flags announced that The New Revolution would offer a new VR experience known as The New Revolution Galactic Attack. It was billed as the world's first mixed Virtual Reality Experience powered by Oculus VR. The experience was centered around an alien invasion in space. As riders crest the lift hill, the setting changed into an intergalactic battle seen from the cockpit of a fighter spaceship. It became available to the public on February 25.

Beginning on November 18, 2017, Six Flags debuted a new VR experience to match the "Holiday in the Park" theme. Dubbed "Santa's Wild Sleigh Ride," it placed riders in Santa's sleigh as he delivered presents to a snowy town.

The VR option was extremely popular, causing 2-3 hour lines. The headsets would overheat and make the lines even longer. Therefore, the headsets were moved to Lex Luthor's Drop of Doom in 2018. With the VR feature removed, the ride now operates in "Classic Revolution" mode.

All content from Kiddle encyclopedia articles (including the article images and facts) can be freely used under Attribution-ShareAlike license, unless stated otherwise. Cite this article:
The New Revolution (roller coaster) Facts for Kids. Kiddle Encyclopedia.