Although original architectural drawings of Wolseley Hall drafted in 1886 show space allocated to a museum, the museum in its current form was officially opened in 1983 during the royal visit of H.R.H. Prince Philip, Duke of Edinburgh. It is dedicated to the exploits of The Royal Canadian Regiment. Artifacts displayed in the museum cover the regiment's activities from the Yukon Gold Rush to their current work in Afghanistan. 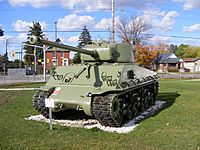 The museum preserves regimental history and serves as a training medium to teach regimental history through the collection of documents, pictures, books, military artifacts, etc. It provides research facilities for the study of Canadian military history dating from 1833 in so far as it affects The Royal Canadian Regiment. The museum displays and illustrates in an appropriate manner the dress, weapons, and customs of the regiment’s military heritage including the history of The London and Oxford Fusiliers (The Canadian Fusiliers (City of London Regiment), and The Oxford Rifles – of Woodstock, Ontario). The museum serves as a place of military interest for the public and Canadian Forces personnel.

Collecting regimental artifacts is an activity that goes back to the beginnings of The RCR. To fulfill its mandate, the museum continues to pro-actively collect historically significant objects and archives that are connected to The RCR history. A large variety of artifacts forms our collection today: regimental memorials, silverware, uniforms, medals, original art, weapons, military equipment, archives, musical instruments, etc.

Among the significant items on display is a scarf which is an exact replica of one hand knit by Queen Victoria during the Second Boer War (one of eight that she made). The original scarf presented to Private Richard Thompson of The RCR is on display in the Canadian War Museum. Four such scarves were presented to soldiers of the British Army, and four to soldiers of colonial forces (Canada, Australia, New Zealand and South Africa).

Other items of interest are a wooden cross from Flanders Fields, a recreation of a World War I trench and a street scene from the Italian Campaign. Outside the museum is a display of artillery and military vehicles, including a Universal Carrier, a 25 pounder and a Lynx reconnaissance vehicle. 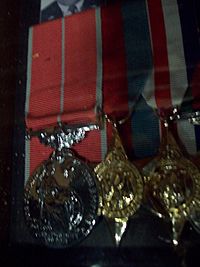 British Empire Medal, mounted with other medals, on display at the Royal Canadian Regiment Museum

The museum is affiliated with: CMA, OMA, CHIN, OMMC, HPMMN.

All content from Kiddle encyclopedia articles (including the article images and facts) can be freely used under Attribution-ShareAlike license, unless stated otherwise. Cite this article:
The Royal Canadian Regiment Museum Facts for Kids. Kiddle Encyclopedia.