The Seven Swabians facts for kids 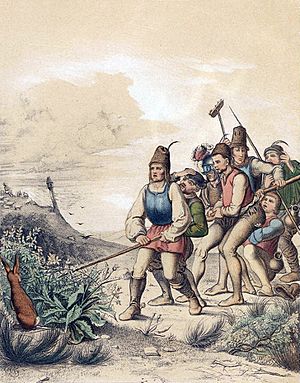 The Seven Swabians encounter a hare. 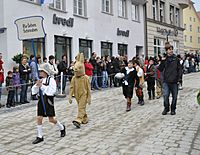 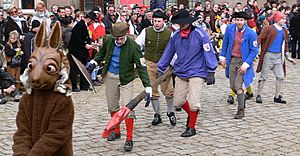 The Seven Swabians (Die Sieben Schwaben) is a German fairy tale, collected by The Brothers Grimm in the second volume edition of their Kinder- und Hausmärchen (1857) under the number KHM119. The term Swabians refers to people from the German region Swabia, though in Switzerland it refers to Germans in general.

Once upon a time there were Seven Swabians who travelled through the world. To be safe from danger they carried one long spear with them. One day in July they walk through a meadow just by nightfall and notice a hornet buzzing by. Unaware what they just heard the men start to panic, thinking it was a war drum. One of them tries to flee, jumps over a fence and then walks right on the teeth of a rake, whereupon the handle hits him in the face. He quickly begs for mercy and tells the invisible attacker that he'll surrender, whereupon his six friends do the same. Later, when they finally understand they were fooled they decide to keep this embarrassing anecdote a secret. To prevent the story from getting out they swear to not say anything about it until one of them should accidentally open his mouth.

Later they encounter a hare sleeping in the sun. They take the animal for a monster and decide to attack it. After bracing themselves with all the courage they can get they strike out and the hare runs away, whereupon they realize they've once again been fooled.

The septet travels onward until they reach the river Moselle. Unaware how to cross it they ask a man on the opposite side of the river for help. Due to the distance and their language the man doesn't understand what they were saying and he asked them in the dialect of Trier: "Wat, Wat?" This causes the men to think that they have to wade through the water. As the first Swabian gets into the river he starts to sink into the mud. His hat is blown away to the opposite shore, next to a frog who croaks noises that sound like "wat, wat, wat". The six surviving Swabians think it's their friend telling them to wade across; they rush in the water and all drown.

All content from Kiddle encyclopedia articles (including the article images and facts) can be freely used under Attribution-ShareAlike license, unless stated otherwise. Cite this article:
The Seven Swabians Facts for Kids. Kiddle Encyclopedia.