The Stone Flower facts for kids

"The Stone Flower" (Russian: Каменный цветок, tr. Kamennyj tsvetok; IPA: [ˈkamʲənʲɪj tsvʲɪˈtok]), also known as "The Flower of Stone", is a folk tale (also known as skaz) of the Ural region of Russia collected and reworked by Pavel Bazhov, and published in Literaturnaya Gazeta on 10 May 1938 and in Uralsky Sovremennik. It was later released as a part of the story collection The Malachite Box. "The Stone Flower" is considered to be one of the best stories in the collection. The story was translated from Russian into English by Alan Moray Williams in 1944, and several times after that.

Pavel Bazhov indicated that all his stories can be divided into two groups based on tone: "child-toned" (e.g. "Silver Hoof") with simple plots, children as the main characters, and a happy ending, and "adult-toned". He called "The Stone Flower" the "adult-toned" story.

The Moscow critic Viktor Pertsov read the manuscript of "The Stone Flower" in the spring of 1938, when he traveled across the Urals with his literary lectures. He was very impressed by it and published the shortened story in Literaturnaya Gazeta on 10 May 1938. His complimenting review The fairy tales of the Old Urals (Russian: Сказки старого Урала, tr. Skazki starogo Urala) which accompanied the publication.

After the appearance in Literaturnaya Gazeta, the story was published in first volume of the Uralsky Sovremennik in 1938. It was later released as a part of Malachite Box collection on 28 January 1939.

The story was published in the collection Russian Magic Tales from Pushkin to Platonov, published by Penguin Books in 2012. The title was translated by Anna Gunin as "The Stone Flower". 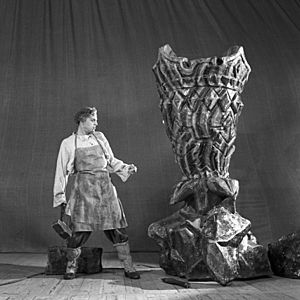 Vladimir Preobrazhensky as Danilo in The Tale of the Stone Flower ballet, 1 March 1954.

The main character of the story, Danilo, is a weakling and a scatterbrain, and people from the village find him strange. He is sent to study under the stone-craftsman Prokopich. One day he is given an order to make a fine-molded cup, which he creates after a thornapple. It turns out smooth and neat, but not beautiful enough for Danilo's liking. He is dissatisfied with the result. He says that even the simplest flower "brings joy to your heart", but his stone cup will bring joy to no one. Danilo feels as if he just spoils the stone. An old man tells him the legend that a most beautiful Stone Flower grows in the domain of the Mistress of the Copper Mountain, and those who see it start to understand the beauty of stone, but "life loses all its sweetness" for them. They become the Mistress's mountain craftsmen forever. Danilo's fiancée Katyenka asks him to forget it, but Danilo longs to see the Flower. He goes to the copper mine and finds the Mistress of the Copper Mountain. He begs her to show him the Flower. The Mistress reminds him of his fiancée and warns Danilo that he would never want to go back to his people, but he insists. She then shows him the Malachite Flower. Danilo goes back to the village, destroys his stone cup and then disappears. "Some said he'd taken leave of his senses and died somewhere in the woods, but others said the Mistress had taken him to her mountain workshop forever".

The main character of the story, Danilo the Craftsman, was based on the real miner Danila Zverev (Russian: Данила Кондратьевич Зверев, tr. Danila Kondratyevich Zverev; 1858–1938). Bazhov met him at the lapidary studio in Sverdlovsk. Zverev was born, grew up and spent most of his life in Koltashi village, Rezhevsky District. Before the October Revolution Zverev moved to Yekaterinburg, where he took up gemstone assessment. Bazhov later created another skaz about his life, "Dalevoe glyadeltse". Danila Zverev and Danilo the Craftsman share many common traits, e.g. both lost their parents early, both tended cattle and were punished for their dreaminess, both suffered from poor health since childhood. Danila Zverev was so short and thin that the villagers gave him the nickname "Lyogonkiy" (Russian: Лёгонький). Danilo from the story had another nickname "Nedokormysh" (Russian: Недокормыш). Danila Zverev's teacher Samoil Prokofyich Yuzhakov (Russian: Самоил Прокофьич Южаков) became the source of inpisration for Danilo the Craftsman's old teacher Prokopich.

"The Master Craftsman" redirects here. For a member of a guild, see Master craftsman.

"The Master Craftsman" (Russian: Горный мастер, tr. Gornyj master) was serialized in Na Smenu! from 14 to 26 January 1939, in Oktyabr (issues 5–6), and in Rabotnitsa magazine (issues 18–19). In 1944 the story was translated from Russian into English by Alan Moray Williams and published by Hutchinson as a part of the collection The Malachite Casket: Tales from the Urals. The title was translated as "The Master Craftsman". In the 1950s translation of The Malachite Casket, made by Eve Manning, the story was published as "The Mountain Craftsman". The story was published in the collection Russian Magic Tales from Pushkin to Platonov, published by Penguin Books in 2012. The title was translated by Anna Gunin as "The Mountain Master".

The story begins after the disappearance of Danilo. For several years Danilo's betrothed Katyenka (Katya) waits for him and stays unmarried despite the fact that everyone laughs at her. She is the only person who believes that Danilo will return. She is quickly nicknamed "Dead Man's Bride". When both of her parents die, she moves away from her family and goes to Danilo's house and takes care of his old teacher Prokopich, although she knows that living with a man can ruin her reputation. Prokopich welcomes her happily. He earns some money by gem-cutting, Katya runs the house, cooks, and does the gardening. When Prokopich gets too old to work, Katya realizes that she cannot possibly support herself by needlework alone. She asks him to teach her some stone craft. Prokopich laughs at first, because he does not believe gem-cutting is a suitable job for a woman, but soon relents. He teaches her how to work with malachite. After he dies, Katya decides to live in the house alone. Her strange behaviour, her refusal to marry someone and lead a normal life cause people at the village to think that she is insane or even a witch, but Katya firmly believes that Danilo will "learn all he wants to know, there in the mountain, and then he'll come". She wants to try making medallions and selling them. There are no gemstones left, so she goes to the forest, finds an exceptional piece of gemstone and starts working. After the medallions are finished, she goes to the town to the merchant who used to buy Prokopich's work. He reluctantly buys them all, because her work is very beautiful. Katya feels as if this was a token from Danilo. She runs back to the forest and starts calling for him. The Mistress of the Copper Mountain appears. Katya bravely demands that she gives Danilo back. The Mistress takes her to Danilo and says: "Well, Danilo the Master Craftsman, now you must choose. If you go with her you forget all that is mine, if you remain here, then you must forget her and all living people". Danilo chooses Katya, saying that he thinks about her every moment. The Mistress is pleased with Katya's bravery and rewards her by letting Danilo remember everything that he had learned in the Mountain. She then warns Danilo to never tell anyone about his life there. The couple thanks the Mistress and goes back to the village. When asked about his disappearance, Danilo claims that he simply left to Kolyvan to train under another craftsman. He marries Katya. His works is extraordinary, and everyone starts calling him "the mountain craftsman".

This family's story continues in "A Fragile Twig", published in 1940. "A Fragile Twig" focuses on Katyenka and Danilo's son Mitya. This is the last tale about Danilo's family. Bazhov had plans for the fourth story about Danilo's family, but it was never written. In the interview to a Soviet newspaper Vechernyaya Moskva the writer said: "I am going to finish "The Stone Flower" story. I would like to write about the heirs of the protagonist, Danilo, [I would like] to write about their remarkable skills and aspirations for the future. I'm thinking about leading the story to the present day". This plan was later abandoned.

All content from Kiddle encyclopedia articles (including the article images and facts) can be freely used under Attribution-ShareAlike license, unless stated otherwise. Cite this article:
The Stone Flower Facts for Kids. Kiddle Encyclopedia.