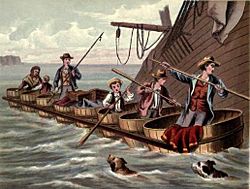 The Swiss Family Robinson (German: Der Schweizerische Robinson) is a novel by Johann David Wyss. It was first published in 1812. The story is about a Swiss family shipwrecked in the East Indies while on their way to Port Jackson, Australia.

It was written by Swiss pastor Johann David Wyss, edited by his son Johann Rudolf Wyss and illustrated by his son Johann Emmanuel Wyss. The novel was intended to teach his four sons about family values, good husbandry, the uses of the natural world and self-reliance. Wyss' attitude toward education is in line with the teachings of Jean-Jacques Rousseau. Many of the episodes have to do with Christian-oriented moral lessons such as frugality, husbandry, acceptance, cooperation, etc. The family includes the sons Fritz, Ernest, Jack and Franz. It also includes their mother and their father who is the main character and narrator. The adventures are presented as a series of lessons in natural history and the physical sciences. It resembles other, similar educational books for children in this period. Examples include Charlotte Turner Smith's Rural Walks: in Dialogues intended for the use of Young Persons (1795), Rambles Further: A continuation of Rural Walks (1796), A Natural History of Birds, intended chiefly for young persons (1807). But the novel differs in that it is modeled on Defoe's Robinson Crusoe, a genuine adventure story. It presents a geographically impossible array of large mammals that probably could never have existed together on a single island.

Over the years there have been many versions of the story with episodes added, changed, or deleted. Perhaps the best-known English version is by William H. G. Kingston, first published in 1879. It is based on Isabelle de Montolieu's 1813 French adaptation and 1824 continuation (from chapter 37) Le Robinson suisse, ou, Journal d'un père de famille, naufragé avec ses enfants in which were added further adventures of Fritz, Franz, Ernest, and Jack. Other English editions that claim to include the whole of the Wyss-Montolieu narrative are by W. H. Davenport Adams (1869–1910) and Mrs H. B. Paull (1879).

Although movie and TV adaptations typically name the family "Robinson", it is not a Swiss name. The "Robinson" of the title refers to Robinson Crusoe. The German name translates as the Swiss Robinson, and identifies the novel as belonging to the Robinsonade genre, rather than as a story about a family named Robinson.

The novels in one form or another have also been adapted numerous times, sometimes changing location and/or time period:

Made for TV movies

All content from Kiddle encyclopedia articles (including the article images and facts) can be freely used under Attribution-ShareAlike license, unless stated otherwise. Cite this article:
The Swiss Family Robinson Facts for Kids. Kiddle Encyclopedia.