The labyrinth of Versailles facts for kids 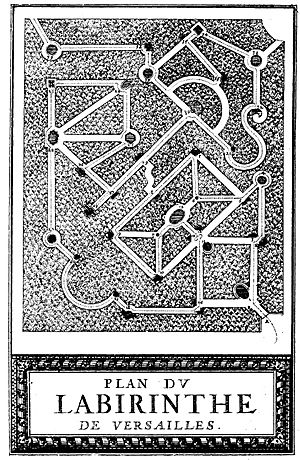 The labyrinth of Versailles was a hedge maze in the Gardens of Versailles with groups of fountains and sculptures depicting Aesop's fables. André Le Nôtre initially planned a maze of unadorned paths in 1665, but in 1669, Charles Perrault advised Louis XIV to include thirty-nine fountains, each representing one of the fables of Aesop. The work was carried out between 1672 and 1677. Water jets spurting from the animals mouths were conceived to give the impression of speech between the creatures. There was a plaque with a caption and a quatrain written by the poet Isaac de Benserade next to each fountain. A detailed description of the labyrinth, its fables and sculptures is given in Perrault's Labyrinte de Versailles, illustrated with engravings by Sébastien Leclerc.

In 1778 Louis XVI had the labyrinth removed and replaced by an arboretum of exotic trees planted as an English-styled garden. 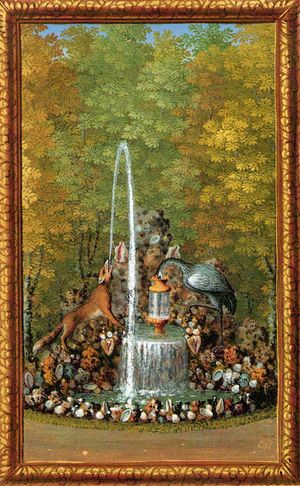 The fable of the Fox and the Crane, from Jacques Bailly's Le Labyrinthe de Versailles

In 1665, André Le Nôtre planned a hedge maze of unadorned paths in an area south of the Latona Fountain near the Orangerie. In 1668 Jean de La Fontaine published his first collection Fables Choisies, dedicated to "Monseigneur" Louis, le Grand Dauphin, the six-year-old son of Louis XIV. Although La Fontaine had incurred the royal displeasure, his poems perhaps encouraged Charles Perrault, author of the Mother Goose stories, who the year before had been named senior civil servant in the Superintendence of the King's Buildings, to advise Louis XIV in 1669 to remodel the labyrinth in such a way as to serve the Dauphin’s education. Between 1672 and 1677 Le Nôtre redesigned the labyrinth to feature thirty-nine fountains that depicted stories from Aesop’s Fables. The sculptors Jean-Baptiste Tuby, Etienne Le Hongre, Pierre Le Gros, and the brothers Gaspard and Balthazard Marsy worked on these thirty-nine hydraulic sculptures.

Each fountain was accompanied by a plaque on which the fable was printed, with verse written by Isaac de Benserade. It was from these plaques, Louis XIV’s son learned to read. In his Fables d'Ésope en quatrains, dont il y en a une partie au labyrinthe de Versailles de Benserade claims that, as well being the one to choose the fables, it was the King himself who had wanted a quatrain to describe each of them.

Once completed in 1677 the labyrinth contained thirty-nine fountains with 333 painted metal animal sculptures. The water for the elaborate waterworks was conveyed from the Seine by the Machine de Marly, which used fourteen water-wheels driving 253 pumps, some of which worked at a distance of three-quarters of a mile.

The layout of the maze was unusual, as there was no central goal, and, despite the five-metre-high (16 ft) hedges, allowed glimpses ahead. Jean-Aymar Piganiol de La Force in his Nouvelle description du château et parc de Versailles et de Marly (1702) describes the labyrinth as a "network of allées bordered with palisades where it is easy to get lost." He continues: "At every turn you see a fountain decorated with delicate rocaille, and representing very simply a fable, the subject of which is indicated by a four-line inscription in gold letters on a bronze plate."

Shortly after the labyrinth was completed, Perrault published a description in his Recueil de divers ouvrages en prose et en vers. "At each end of a path," he wrote, "and wherever they cross, there are fountains, so arranged that in whatever place one finds oneself, one sees always three or four and often six or seven of them at once. The basins of these fountains, all different in figure and design, are enriched with fine rock-work and rare shells and for ornamentation have different animals who represent the most charming fables of Aesop. These animals are so well made and lifelike that they seem to be still in the action that they depict; one can even say that they in some way speak the words that the fable attributes to them, since the water that they spout forth at one another seems not only to give them life and action, but serves them also as a voice to express their passions and their thoughts." 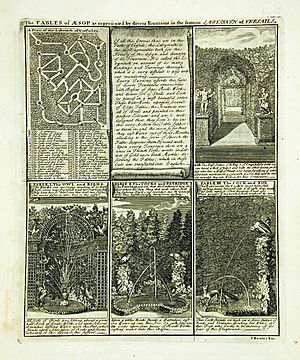 This labyrinth was so popular, not only with the King and the young Dauphin, but with the nobility and gentry who were allowed to visit the garden, that a guidebook was published, Perrault's Labyrinte de Versailles, which contained the fables, a description of the fountains and the quatrains written by the poet Isaac Benserade for each fable. It was first published in 1675, then reprinted in 1677 with engravings by Sébastien Leclerc. A third version, in which the engravings by Leclerc were illuminated by Jacques Bailly was produced soon after. The small, pocket-sized books were richly bound in red Morocco leather with stamped gilt decoration. The book was eventually translated into English, appearing twice in 1768, in John Bowles's edition and Daniel Bellamy senior's Aesop at Court, with plates engraved by George Bickham.

The labyrinth contributed greatly to the wonder that the Gardens of Versailles instilled in visitors and diplomats from abroad. An illustrated guide printed in Amsterdam in 1682 praised Le Nôtre's work saying, "Amongst all these works there is nothing more admirable and praiseworthy than the Royal Garden at Versailles, and, in it, the Labyrinth... The Turnings and Windings, edged on both sides with green cropt hedges, are not at all tedious, by reason that at every hand there are figures and water-works representing the mysterious and instructive fables of Aesop".

The composer Marin Marais, hired in 1676 as a musician to the royal court of Versailles, knew the labyrinth. He wrote in the avertissements to his The Labyrinth and other stories, "One enters the labyrinth and, after descending to the ducks and dog comes up again next to Bacchus." He also knew that nearby the labyrinth there was another bosquet called the Ballroom, which could explain the chaconne which brings his long, mysterious Labyrinthe to a close. Titon du Tillet admired it: "The piece from his Fourth Book, titled Le Labyrinthe, in which after roaming through various keys, touching diverse dissonances, and underlining, first with sombre tones and later with lively and sprightly ones, the uncertainty of a man lost in a labyrinth, the composer manages happily to find the way out at last and finishes with a graceful and natural sounding Chaconne." 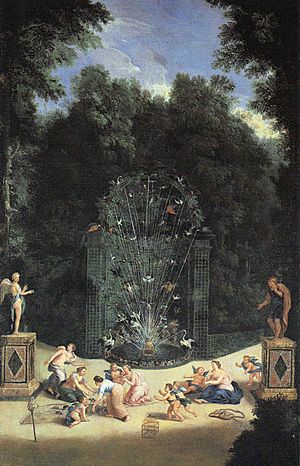 Jean Cotelle the younger's painting of the entrance to the Labyrinth of Versailles; Cupid ('Love') on the left, Aesop on the right. 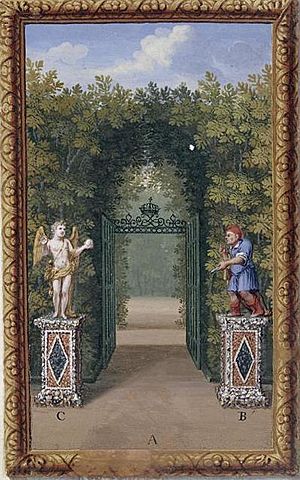 Two statues were placed at the entrance to the labyrinth ("A" in the plan), one of Aesop by Le Gros ("B") holding a scroll of paper and the other of Love or Cupid by Tuby ("C") holding a ball of thread, like Ariadne's.

Perrault writes of the two figures: "Aesop has a roll of paper which he shows to Love who has a ball of thread, as if to say that if God has committed men to troublesome labyrinths, there is no secret to getting out as long as Love is accompanied by wisdom, of which Aesop in his fables teaches the path."

For Michel Conan, the maze's design "invited all visitors to give first-person attention" to their movements, and the statues "advised that unless they pondered their choices they might fail to find their way through the labyrinth." For him, the labyrinth, as a metaphor for life, "encouraged self-reflection and a search for a personal code of conduct", with the dialogue between Cupid and Aesop at the entrance emphasising this:

The fables in the labyrinth 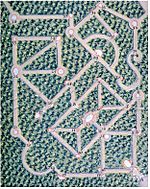 Plan of the Labyrinth of Versailles, with the fountains (numbered)

Citing repair and maintenance costs, Louis XVI ordered the labyrinth destroyed in 1778. In its place, an arboretum of exotic trees was planted as an English-styled garden. Rechristened Bosquet de la Reine, it would be in this part of the garden that an episode of the Affair of the Diamond Necklace, which compromised Marie-Antoinette, transpired in 1785. In the reserve collections of the Musée national des châteaux de Versailles et de Trianon, there remain only thirty-four fragments of the fountains, as well as the statues of L'Amour and Aesop.

All content from Kiddle encyclopedia articles (including the article images and facts) can be freely used under Attribution-ShareAlike license, unless stated otherwise. Cite this article:
The labyrinth of Versailles Facts for Kids. Kiddle Encyclopedia.