Thelymitra juncifolia, known as the large-spotted sun orchid, is a species of orchid that is endemic to south-eastern Australia and to New Zealand. It has a single thin, dark green leaf and up to five blue flowers with relatively large, dark blue spots on the dorsal sepal and petals. It is similar to T. ixioides but has fewer, smaller flowers with larger dark blue spots. 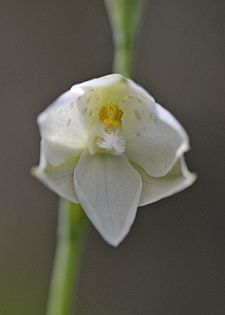 Thelymitra juncifolia was first formally described in 1840 by John Lindley and the description was published in his book The Genera and Species of Orchidaceous Plants. The specific epithet (juncifolia) is derived from the Latin words juncus meaning "rush", "bogrush" or "woodrush" and folia meaning "leaves".

The large-spotted sun orchid is widespread and common in Australia within its range. It grows in heath, forest, woodland and scrub in New South Wales and the Australian Capital Territory, in Victoria, South Australia and Tasmania.

All content from Kiddle encyclopedia articles (including the article images and facts) can be freely used under Attribution-ShareAlike license, unless stated otherwise. Cite this article:
Thelymitra juncifolia Facts for Kids. Kiddle Encyclopedia.