Thelymitra megacalyptra, commonly called the plains sun orchid, is a species of orchid that is endemic to eastern Australia. It has a single erect, fleshy leaf and up to fifteen blue to purplish, sometimes lilac, pink or white flowers with white tufts on top of the anther. It is known as Thelymitra megcalyptra by some authorities. 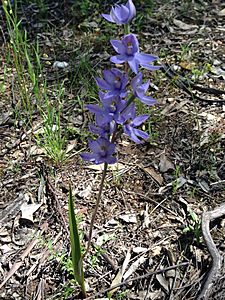 The plains sun orchid was first formally described in 1879 by Robert Fitzgerald from a specimen collected near Dartmoor and the description was published in Australian Orchid Research. Australian authorities retain the name Thelymitra megcalyptra for this species but the World Checklist of Selected Plant Families uses Thelymitra megacalyptra. The specific epithet (megacalyptra) is derived from the Ancient Greek words mega meaning "large" or "great" and kalyptra meaning "veil".

Thelymitra megacalyptra grows in forest, heath and scrubland, sometimes forming large colonies. It occurs in New South Wales south from the Mount Kaputar National Park, in the Australian Capital Territory, in drier parts of Victoria and in the south-east of South Australia.

All content from Kiddle encyclopedia articles (including the article images and facts) can be freely used under Attribution-ShareAlike license, unless stated otherwise. Cite this article:
Thelymitra megacalyptra Facts for Kids. Kiddle Encyclopedia.