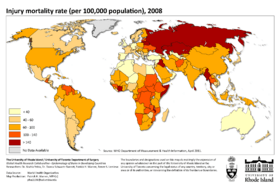 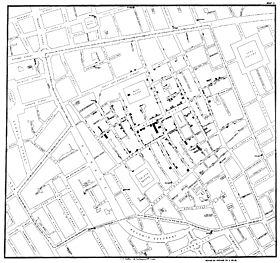 John Snow's cholera map about the cholera deaths in London in the 1840s, published 1854

A thematic map is a kind of map. Different from normal maps, a thematic map is designed to show the distribution of human or natural features or data. The information may or may not be related to geography. For example, a map which shows population is a thematic map.

Thematic maps are called so because they show features relating to a particular theme or aspect of geography.

An early contributor to thematic mapping in England was the English astronomer Edmond Halley (1656–1742). His first important map was a star chart of the constellations of the Southern Hemisphere, published in 1686. In the same year he also published something new, a map of the globe (Earth) in an article about trade winds. This map is sometimes called the first weather map.

Another example of early thematic mapping comes from London physician John Snow. Snow’s cholera map of 1854 is the best known example of using thematic maps for analysis of data. His method anticipates the principles of a geographic information system (GIS). He started with an accurate map of a London neighborhood which included streets and water pump locations. Onto this Snow placed a dot for each cholera death. The pattern centered around one particular pump on Broad Street. At Snow’s request, the handle of the pump was removed, and new cholera cases ceased almost at once. Further investigation of the area revealed the Broad Street pump was near a cesspit under the home of the outbreak's first cholera victim.

All content from Kiddle encyclopedia articles (including the article images and facts) can be freely used under Attribution-ShareAlike license, unless stated otherwise. Cite this article:
Thematic map Facts for Kids. Kiddle Encyclopedia.