Kids Encyclopedia Facts
Not to be confused with Theodore Roosevelt Memorial Bridge. 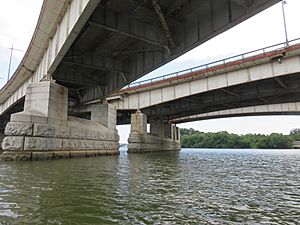 Underside of the bridge west of Roosevelt Island 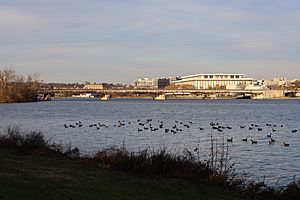 TRA president Frank Ross McCoy, a vocal opponent of the bridge, died in 1954, weakening the TRA's bargaining position. In July 1955, the association agreed to allow the federal government to use the southern end of Theodore Roosevelt Island. The United States Commission of Fine Arts approved a steel bridge design in December 1955.

President Dwight Eisenhower signed legislation authorizing the bridge on June 4, 1958. This legislation designated the bridge for the first time as the "Theodore Roosevelt Bridge". Construction of the bridge began in 1960, and it opened on June 23, 1964.

Theodore Roosevelt Bridge underwent minor rehabilitation work overseen by the District of Columbia Department of Transportation (DDOT) in 2013. After this work, DDOT inspected the bridge in 2014 and discovered additional need for repair. Due to heavy funding needs to replace or repair other bridges in the city, DDOT pushed the date for these repairs to 2021.

All content from Kiddle encyclopedia articles (including the article images and facts) can be freely used under Attribution-ShareAlike license, unless stated otherwise. Cite this article:
Theodore Roosevelt Bridge Facts for Kids. Kiddle Encyclopedia.