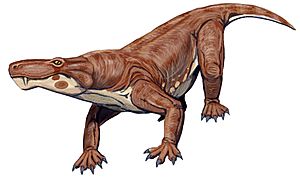 Theriodonts are a major group of therapsids. They are a clade which include not only the traditional theriodonts, but also their descendants the mammals as well (in the same way that theropod dinosaurs include the birds as a sub-clade).

Theriodonts fall into three main groups: Gorgonopsia, Therocephalia and Cynodontia. Early theriodonts may have been warm-blooded. Early forms were carnivorous, but several later groups became herbivorous during the Triassic.

Theriodont jaws were more mammal-like than was the case of other therapsids, because their dentary (lower jaw) was larger, which gave them more efficient chewing. Several other bones that were previously on the lower jaw, moved into the ears, allowing the theriodonts to hear better and their mouths to open wider. This made the theriodonts the most successful group of synapsids.

Eutheriodonts refer to all theriodonts except the gorgonopsians (the most primitive group). They included the therocephalians, cynodonts and their descendants – the mammals. The name means "true beast tooth". The eutheriodonts have larger skulls, accommodating larger brains and improved jaw muscles.

The theriodonts (eutheriodonts) are one of the two synapsid survivors of the great Permian–Triassic extinction event, the other being the dicynodonts. Therocephalians included both carnivorous and herbivorous forms; both died out after the Lower Triassic.

The remaining theriodonts, the cynodonts, also included carrnivores such as Cynognathus, as well as newly evolved herbivorous Traversodonts. While Traversodonts for the most part remained medium-sized to reasonably large (length of largest species up to 2 meters), the carnivorous forms became progressively smaller as the Triassic progressed.

By the Upper Triassic the small cynodonts included the rodent-like tritylodonts (possibly related to or descended from travsersodonts), and the tiny, shrew-like, trithelodonts, which evolved into the first mammals. The trithelodonts died out during the Jurassic, and the tritylodonts survived in the Cretaceous, but the mammals continued to evolve. Many mammal groups managed to survive the Cretaceous–Tertiary extinction event, which wiped out the non-avian dinosaurs, allowing the mammals to diversify and dominate the Earth.

All content from Kiddle encyclopedia articles (including the article images and facts) can be freely used under Attribution-ShareAlike license, unless stated otherwise. Cite this article:
Theriodont Facts for Kids. Kiddle Encyclopedia.