Thirlmere is a small semi-rural town in the Macarthur Region of New South Wales, Australia, in Wollondilly Shire. Popularly known for its railway origins, the town is located 89 km south west of Sydney (about a 60-minute drive), one third of the distance from Sydney to Canberra. At the 2016 census, Thirlmere had a population of 4,046.

Thirlmere was previously known as Village of Thirlmere and was originally named after Thirlmere in England.

The Thirlmere area was first discovered by the British in 1798, whose attention was focussed more on the Thirlmere Lakes area and finding an alternate route north towards Bathurst.

Thirlmere boomed with the creation of the Great Southern Railway in 1863 to 1867, when the area was blanketed in tents to house the many railway workers that came to the area to work. Thirlmere was valued mostly for the proximity of the Thirlmere Lakes (then called Picton Lakes) which were used to provide water for the steam trains. During this period Thirlmere was also the home for a number of timber mills, whose main product was the milling of sleepers for the railway line.

The Thirlmere section of the Main Southern Railway was deviated in 1919 to a less steep alignment with easier grades, and the original line became the Picton Loop Line. This transformed the village from a hive of steam train activity to a quiet farming region, mainly supplying the surrounding villages with foods and goods.

Many Estonian immigrants settled in Thirlmere from 1924 onwards, especially after the Second World War when tens of thousand had fled to avoid being sent to Siberia for alleged political and economic crimes. Estonians are largely responsible for the development of the successful poultry industry, which at one stage was the largest egg producer in the state and still provides the great majority of NSW's poultry produce. Many of the younger generations of Estonians have left the area and moved closer to the city but other original immigrants and newcomers live there still in Australia's only Estonian Retirement Village.

In the 1960s and 1970s nearby coal mines provided a boost in employment and also drew more people into the area to work and live. A few coal mines are still operating today but these do not employ as many people as they once did.

The median age of people in Thirlmere was 40 years. Children aged 0–14 years made up 20.0% of the population and people aged 65 years and over made up 19.3% of the population. 29.2% of people were attending an educational institution. Of these, 32.1% were in primary school, 22.2% in secondary school and 14.7% in a tertiary or technical institution. 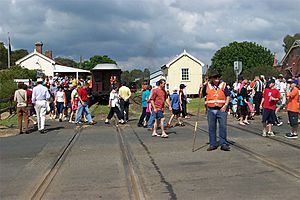 The New South Wales Rail Transport Museum is Australia's largest and oldest railway museum with over 125 railway exhibits. It is the home to many steam and diesel locomotives, the most popular of which is the famous 3801. Steam train rides are available on Sundays during the winter months, to avoid the risk of bushfire in this rural area.

Each year on the first Sunday in March, the town's population grows to over 15,000 as tourists flock to the "Thirlmere Festival of Steam" - NSW's premier annual steam event featuring the state's biggest gathering of main-line steam locos and all the fun of the fair and markets.

The Museum also operates excursion trains from Sydney to Thirlmere hauled by steam and/or diesel locomotives.

As well as being an important environment ecosystem, Thirlmere Lakes (managed by the NSW Parks & Wildlife Service) is a popular picnic spot for locals and day trippers from Sydney, who take advantage of the free electric barbecues. Covering an area of 627 hectares (1,550 acres), there are several sand beaches, with the lakes (with a maximum depth of 6m) being popular for kayaking and canoeing. Thirlmere Lakes was also a popular location for locals to swim.

There are a few bush walking trails with the longest being a 16 km return trip. Camping is not allowed.

Thirlmere Creative Traders Markets are held on the third Sunday of each month, outside the Rail Transport Museum.

Creative Traders Markets showcase the creative talents of the Wollondilly Shire and provide an opportunity for locals and visitors to purchase local fresh produce direct from the farmer and hand made local products.

All content from Kiddle encyclopedia articles (including the article images and facts) can be freely used under Attribution-ShareAlike license, unless stated otherwise. Cite this article:
Thirlmere, New South Wales Facts for Kids. Kiddle Encyclopedia.