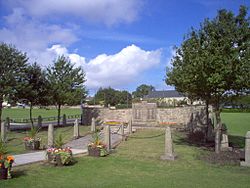 The Thornley War Memorial in 2005, prior to the addition of the John Scott Youll VC monument. The colliery was directly opposite to the Memorial. Hartlepool Street ran down to the right and High Street up to the left.

Thornley is a village in County Durham, in England. It is situated about 5 miles (9 km) to the east of Durham and 5 miles (7 km) west of Peterlee. Thornley is part of the Sedgefield parliamentary constituency of which Tony Blair was the Member of Parliament from 1983 until 2007.

All content from Kiddle encyclopedia articles (including the article images and facts) can be freely used under Attribution-ShareAlike license, unless stated otherwise. Cite this article:
Thornley, Durham Facts for Kids. Kiddle Encyclopedia.