Thornton Creek is 18 miles (29 km) of urban creeks and tributaries from southeast Shoreline through northeast Seattle to Lake Washington. Its 12-square-mile (31 km2) watershed, the largest in Seattle, exhibits relatively dense biodiversity for an urban setting; it is home to frogs, newts, ducks, other birds, and an occasional beaver, in addition to more than 200,000 people. From west of Jackson Park Golf Course in Shoreline, from Sunny Walter-Pillings Pond in Licton Springs–North College Park, and north Northgate Thornton Creek flows through Maple Leaf and Lake City, including the Victory Heights, Meadowbrook, and Matthews Beach neighborhoods, and empties into the lake at Matthews Beach Park.

Thornton Creek flows through Meadowbrook Pond, visited by migratory birds and an occasional transient beaver or coyote. Before European settlement, Native Americans lived around Lake Washington. One of the 18 historic home sites was identified near the mouth of Thornton Creek. Early in the 1900s, the creek was a spawning ground for at least five species of Pacific salmon and trout, as well a habitat for insects, amphibians, muskrats, bats, coyotes, and birds. The areas surrounding the creek were developed without regard for that habitat and the riparian corridor; species' diversity declined, and the creek became a typical degraded urban watershed. Storm water retention, sites restoration, an Environmental Learning Center next to a school, and a fish ladder contributed to restoration and the return of native plants and wildlife.

For many decades, much of the stream has run through culverts, notably under the parking lot of Northgate Mall. Building on gradual successes in restoration, activist neighbors began working with the City of Seattle and developers toward daylighting parts of the buried creek.

In 2004, the City of Seattle purchased the 2.4-acre (0.97 ha) parking lot from Northgate Mall and began building the Thornton Creek Water Quality Channel. Opened in 2009, it achieved several community goals in limited space: integrating a water-quality facility, providing a diverse housing mix, and allowing public open space. It receives and treats runoff from 680 acres (280 ha) by providing a multilayered landscape of native plants that also serves as an amenity for surrounding private development.

Organizations of citizens have cleaned up nearby wetlands, educated the public about stream health and quality of neighborhood life, and rallied to bring more of the creek to daylight. Many restoration projects in Seattle have been in some way connected to or inspired by Thornton Creek.

Neighborhoods of the Thornton Creek watershed 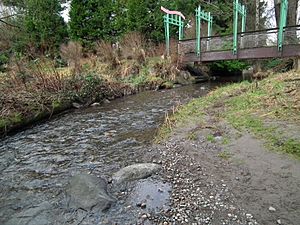 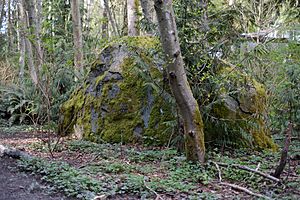 All content from Kiddle encyclopedia articles (including the article images and facts) can be freely used under Attribution-ShareAlike license, unless stated otherwise. Cite this article:
Thornton Creek Facts for Kids. Kiddle Encyclopedia.