Thurstaston Common is an area of almost 250 acres (100 ha) of parklands, wood and heath between Frankby and Thurstaston, on the Wirral Peninsula in North West England. The common is jointly owned by the National Trust and the Metropolitan Borough of Wirral. Royden Country Park is nearby and offers additional facilities.

The Common is a Site of Special Scientific Interest (SSSI) and a local nature reserve. From the top of the 298 ft (91 m) Thurstaston Hill there are views of the Dee Estuary (itself an SSSI) and across to the Clwydian Hills of North Wales. The area is popular with walkers and families. 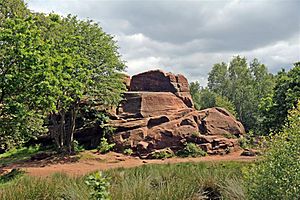 Thurstaston Hill is the location of Thor's Stone, a large sandstone outcrop and a place of romantic legend. In the 19th century it was supposed that early Viking settlers may have held religious ceremonies here. A visit to the site by members of the British Archaeological Association in 1888 heard an account by Rev. A. E. P. Gray, rector of Wallasey, that the 'Thor Stone' was also known in the locality as 'Fair Maiden's Hall' and that children were "in the habit of coming once a year to dance around the stone". This part of Wirral was certainly part of a Norse colony centred on Thingwall in the 10th and 11th centuries. However, geologists and historians now think that the rock is a natural formation similar to a tor, arising from periglacial weathering of the sandstone, which was later exploited by quarrymen in the 18th and 19th centuries.

All content from Kiddle encyclopedia articles (including the article images and facts) can be freely used under Attribution-ShareAlike license, unless stated otherwise. Cite this article:
Thurstaston Common Facts for Kids. Kiddle Encyclopedia.