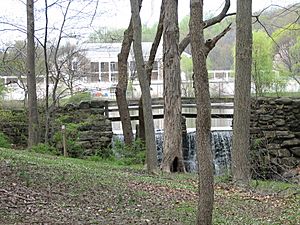 A waterfall in Tibbetts Brook Park

Tibbetts Brook, originally Tippett's Brook or Tibbitt's Brook, is a stream in the southern portion of mainland New York, flowing north to south from the city of Yonkers in Westchester County into the borough of the Bronx within New York City. Originally emptying into Spuyten Duyvil Creek as part of the Harlem River system, the stream is now partially subterranean, ending above ground at the south end of Van Cortlandt Lake within Van Cortlandt Park. There it proceeds into city sewers, draining into either the northern end of the Harlem River or the Wards Island Water Pollution Control Plant. The brook provides significant watershed to both Van Cortlandt Park at its south end and Tibbetts Brook Park at its north end. There have been modern proposals to daylight the southern portion of the brook back onto the surface. 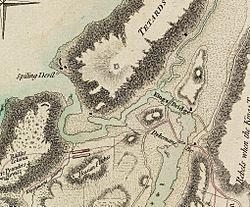 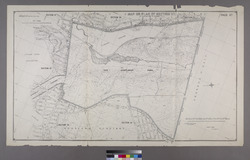 Tibbetts Brook originates at H.F. Redmond Junior Memorial Park just north of Yonkers Avenue in Dunwoodie, Yonkers. It proceeds south through two artificial lakes in Tibbetts Brook Park, on a course parallel and adjacent to the Saw Mill River Parkway and the former New York and Putnam Railroad (now a park trail). South of the park the brook runs in a channel directly adjacent to the northbound side of the parkway, then crosses the Yonkers/Bronx border into Van Cortlandt Park. It runs through the center of the Van Cortlandt Golf Course, then empties into Van Cortlandt Lake, an artificial lake created in 1699 by damming the stream. The brook currently ends at the south edge of the lake, at approximately West 242nd Street. Several storm drains feed excess rainwater into the brook within Yonkers.

At the brook's mouth, the water from the brook proceeds into a brick sewer tunnel, which later merges with the major combined sewer underneath Broadway that carries rainwater, household wastewater, and industrial sewage. The tunnel primarily drains into the Wards Island Water Pollution Control Plant where city sewage is treated. During rainy conditions the sewer overflows into the north end of the Harlem River, via a drain pipe at about West 192nd Street (Heath Avenue). Due to modern development, the brook runs through underpasses and culverts at various points along its course.

As recently as the early 20th Century, Tibbets Brook had two northern tributaries which merged at the north end of modern Tibbets Brook Park. The easternmost began in Redmond Park, while the western stream extended as far as Runyon Heights. The two streams originally merged at Peckham's Lake, later converging at the lakes of Tibbets Brook Park following the completion of the park. The Saw Mill Parkway was built over the western stream in the late 1920s. Until the end of the 19th century, the brook extended past the south end of Van Cortlandt Park. It ran southwest through the site of the current Van Cortlandt Stadium, crossed Broadway at around West 240th Street, then continued southwest through the Kingsbridge neighborhood, running a twisty course along the right-of-way of modern Tibbett Avenue. At approximately West 230th Street, just north of the current site of John F. Kennedy High School, the brook drained into Spuyten Duyvil Creek, which at the time separated the Bronx from Marble Hill, Manhattan.

Until the 1700s, Tibbets Brook split into two smaller streams at around West 237th Street, the westernmost and primary stream along modern Tibbett Avenue feeding into the Spuyten Duyvil, and the easternmost along the right-of-ways of the Putnam Railroad and current Major Deegan Expressway feeding into the Harlem River. The two streams formed a triangular island called Paparinemo that constitutes much of today's Kingsbridge neighborhood. The brook had numerous tributaries, including several within modern Van Cortlandt Park. The north end of the brook within Yonkers and the park is entirely fresh water, while south of the park it was a tidal estuary lined with salt marshes. The watershed from the brook created wetlands surrounding the stream, and formed a northern extension of the Harlem River valley. The original Spuyten Duyvil Creek course has since been filled in, replaced by the Harlem River Ship Canal. 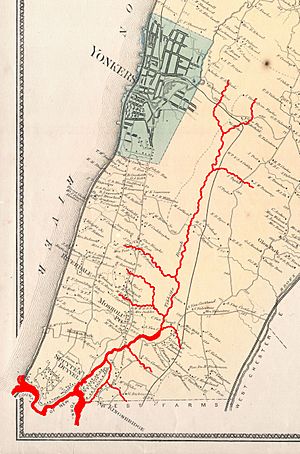 An 1867 map of Yonkers and Western Bronx, showing the course of Tibbetts Brook (in red) prior to modern development.

Tibbetts Brook was originally referred to as Mosholu by local Lenape Native Americans, an Algonquin word meaning "smooth stones" or "small stones". The Mosholu name was later given to Mosholu Parkway. The label Tibbetts Brook was applied by European settlers, named after George Tippett who held property between the Hudson River and Bronx River in the late 17th Century, with the brook running through the center. Although often considered a corruption of the name Tippett, the label may be a combination of the name of Tippett and that of his father-in-law William Betts, who owned the land along with him. The brook has also been referred to as the Yonkers River or Yonkers Creek in the past, previously written as Jonckers or Uncas.

Geological formation and precolonial use 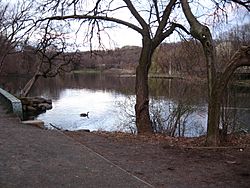 The lake within Van Cortlandt Park, at the south end of the brook

During at least three glacial periods, including the Wisconsin glaciation around 20,000 years ago, ice sheets advanced south across North America carving moraines, valleys, and hills across present-day Bronx and Westchester. As the glacial ice melted, rivers and creeks were formed within valleys, including Tibbetts Brook.

Prior to European colonization, the local Lenape population utilized the brook for drinking water and fishing. Trout swam up the Harlem River in order to use the freshwater portion of the brook as a spawning site. The salt marshes along the stream housed fish and migratory birds, along with mussels, oysters, and crabs. 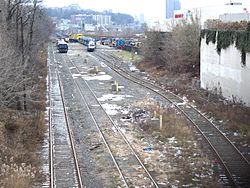 The short portion of the Putnam Railroad still in operation

In the 21st century, it has been proposed to daylight the southern portion of Tibbetts Brook back onto the surface, and to restore and defragment the portions of the stream within Van Cortlandt Park. Proposals to daylight the stream have existed since the 1990s. Around 4,000,000 to 5,000,000 US gallons (15,000,000 to 19,000,000 l; 3,300,000 to 4,200,000 imp gal) of fresh water from the brook enter the sewer system on a daily basis, a total of 2,000,000,000 US gallons (7.6×109 l; 1.7×109 imp gal) annually. The additional water from the brook also contributes to the further overflowing of raw sewage into the Harlem River during rainy conditions. Meanwhile, the lack of natural drainage points within Van Cortlandt Park leads to the flooding of recreational areas within the park.

The New York City Parks Department plans to daylight the brook as part of their "Van Cortlandt Park Master Plan: 2030". The plan also proposes further dredging the lake and stream within the park, and rerouting the stream away from the highways and pedestrian paths to minimize the use of culverts, as well as restoring the natural wetlands created by the brook. The primary route proposed for bringing the brook above ground is the former Putnam Railroad right-of-way, which is currently owned by CSX Transportation but is largely abandoned between the park and the Harlem River. This portion of the Putnam Railroad is directly adjacent to the southbound lanes of the Major Deegan Expressway. The routing would provide a more natural drainage path for the brook into the Harlem River, with none of the water entering the sewer system on a normal basis. The brook would flow through a new park.

All content from Kiddle encyclopedia articles (including the article images and facts) can be freely used under Attribution-ShareAlike license, unless stated otherwise. Cite this article:
Tibbetts Brook Facts for Kids. Kiddle Encyclopedia.