Tikki Tikki Tembo is a 1968 picture book written by Arlene Mosel and illustrated by Blair Lent. The book tells the story of a Chinese boy with a long name who falls into a well. It is a sort of origin myth about why Chinese names are so short today.

Tikki Tikki Tembo is set in ancient China and invents an ancient Chinese custom whereby parents honor their first-born sons with long, elaborate names that everyone is obliged to say completely – no nicknames, no shortening of any kind – while second-born sons are typically given short, unimportant names. A boy named Tikki Tikki Tembo-no Sa Rembo-chari Bari Ruchi-pip Peri Pembo ("The Most Wonderful Thing in the Whole Wide World") and his little brother Chang ("Little or Nothing") are playing very close to a well at their house that their mother has warned them to avoid. Chang falls in the well and his older brother runs to their mother and tells her Chang has fallen down the well. Their mother tells him to get the Old Man with the Ladder. He goes and tells the Old Man. Chang is rescued and then recovers quickly. Some time later, the boys are again playing near the well. This time, the older brother falls in. Chang runs to their mother and tries to tell her that "Tikki Tikki Tembo-no Sa Rembo-chari Bari Ruchi-pip Peri Pembo has fallen into the well." At first she cannot hear him so he says it again. However, because Chang is out of breath from running he sputters and then mispronounces the name. His mother insists that he repeat the name—but with respect. He tries repeatedly until finally his mother tells Chang to get the Old Man with the Ladder. Chang goes to the Old Man with the Ladder. Initially, the old man does not respond because he is asleep. Further, when Chang tries to wake him up, the Old Man with the Ladder—annoyed—tries to fall back asleep. After Chang breathlessly repeats his brother's predicament the Old Man goes with Chang to save his brother from the well. They get Tikki Tikki Tembo-no Sa Rembo-chari Bari Ruchi-pip Peri Pembo from the well, but because of the long time he was in the well, it takes longer for him to recover. The end of the story says that this is why the Chinese have short names. 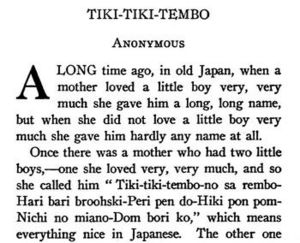 First part of "Tiki-Tiki-Tembo", a story published in 1924

In 1924, the National Association of Junior Chautauquas published a book that contained a story by an anonymous author entitled "Tiki-Tiki-Tembo"; the story concerned a boy "in old Japan" named "Tiki-tiki-tembo-no sa rembo-Hari bari broohski-Peri pen do-Hiki pon pom-Nichi no miano-Dom bori ko." Toward the end of the 1924 story, it is stated that after falling into the well, the title character "never grew up to be a fine Japanese man." A book published in 1968 (the same year as Tikki Tikki Tembo) reprinted the 1924 version of the story.

It is possible that a recorded 1941 version of a similar story (although avoided drowning) called "Long-Name-No-Can-Say" with a fat elder brother named "Nicki Nicki Tembo No So Rembo Oo Ma Moochi Gamma Gamma Goochi" was the first to change it to a Chinese setting.

A similar story is told in the American folksong "(Eddie Kucha Kacha Kama Tosa Nara Tosa Noma) Sama Kama Wacky Brown" recorded in 1960 by the Brothers Four on their eponymous first album; the title character "fell into the deep, dark well" and drowned.

A story published in 1961 by Golden Press, called "The Little Boy With the Long Name", featured an older brother named "Sticky Sticky Stumbo Nos E Rumbo E Pro Pennyo Hara Bara Brisko Nicky Prom Po Nish No Mennyo Dumbricko". The 1961 story ends with the boy's death by drowning, which was ironic because the parents had believed that giving children long names would cause them to live long lives.

Scholastic records released an LP record of the story in 1968. Weston Woods Studios produced a filmstrip and cassette tape version in 1970, which was later distributed on VHS and DVD.

Translations of the book include: 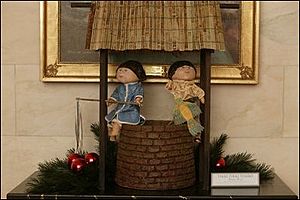 All content from Kiddle encyclopedia articles (including the article images and facts) can be freely used under Attribution-ShareAlike license, unless stated otherwise. Cite this article:
Tikki Tikki Tembo Facts for Kids. Kiddle Encyclopedia.