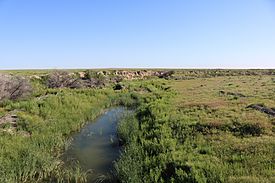 Timpas Creek is a stream in the U.S. state of Colorado.

There is some uncertainty in the origin of the place name Timpas. The area's first European explorers settlers were Spanish, then Mexican. Timpa or timpas is Spanish for tympstone, the port of a blast furnace from which molten slag drains. Alternatively, timpas can also be interpreted as "furnace hearth" — of the shaley and marly rocks of the old Benton Group, the quarried Timpas Limestone would be the thickest and least unsuitable stone for the job.

John Dawson, writing in 1954 in Place names in Colorado, states that the creek was named for the "Timpas Limestone" quarried near the mouth of the creek on to the Arkansas River, and is still quarried today on the bluffs southeast of Rocky Ford. However, G.K. Gilbert, when reporting on the geology of the Arkansas River in 1896, naming new units to replace the old Benton Shale, acknowledged that the Timpas was already a local name for the limestone outcropping over the bluffs of the creek, suggesting that the limestone was named for the creek.

All content from Kiddle encyclopedia articles (including the article images and facts) can be freely used under Attribution-ShareAlike license, unless stated otherwise. Cite this article:
Timpas Creek Facts for Kids. Kiddle Encyclopedia.