Timsgarry (Scottish Gaelic: Tuimisgearraidh) is a village on the Isle of Lewis, in the Outer Hebrides, Scotland. Timsgarry is home to the Baile na Cille Church and the Uig Museum, noted for its giant Chessmen, discovered in the sands in 1831.

Timsgarry lies on the western side of the Isle of Lewis on Uig Bay, 33 1⁄2 miles (54 kilometres) southwest of Stornoway on the B8011 road, to the north of Ardroil. The Erista River flows in the sea at Timsgarry. The coastline here is known as Uig Sands (Tràigh Uuige).

Fragments of Iron Age pottery were recovered from Dun Borranish, just to the south of the main settlement, in 1991. 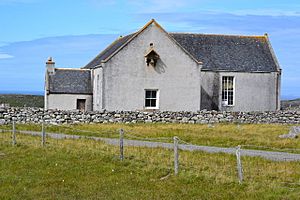 Timsgarry is home to the Baile na Cille Church, and is situated within the parish of Uig. Timsgarry used to have its own chapel, named Capail Mor, further to the west of the present church, which was built in 1724 near to the site of an earlier church, known as Capail Beag. The former manse is still present, with the churchyard.

The Uig Museum is located at Timsgarry, within the community centre, and displays local archaeology, such as replicas of the Uig Chessmen, discovered in the sands in 1831. These were identified as 12th century Viking chess pieces which were made from walrus ivory and whale teeth.

Uig Lodge Golf Course, to the southwest of the village overlooking Uig Sands Bay, was originally established in 1930 and recently restored. It is currently run by the Uig Lodge and used exclusively by hotel guests.

All content from Kiddle encyclopedia articles (including the article images and facts) can be freely used under Attribution-ShareAlike license, unless stated otherwise. Cite this article:
Timsgarry Facts for Kids. Kiddle Encyclopedia.