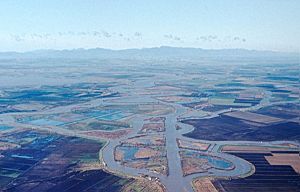 An aerial photo, looking northwest, taken in 1965. Medford Island can be seen to the north and west of Tinsley Island; to its southeast (below it in the photo) are Fern Island, Headreach Island and Tule Island respectively.

All content from Kiddle encyclopedia articles (including the article images and facts) can be freely used under Attribution-ShareAlike license, unless stated otherwise. Cite this article:
Tinsley Island Facts for Kids. Kiddle Encyclopedia.