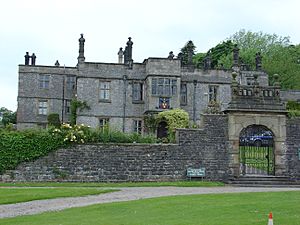 Tissington Hall is an early 17th-century Jacobean mansion house in Tissington, near Ashbourne, Derbyshire. It is a Grade II* listed building.

The FitzHerberts, descended from the Norman family of Norbury Hall, acquired Tissington by the marriage of Nicholas FitzHerbert (the second son of John FitzHerbert of Somersal Herbert) to Ciceley Frauncis, heiress of Tissington, in 1465. 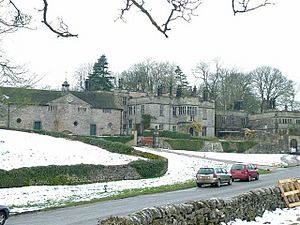 Tissington Hall: the stable block is on the left

It is the hall that makes Tissington Hall unusual. It is one of a small group of compact Derbyshire gentry houses in which a central hall runs through the house from front to back. Nicholas Cooper surmises that the unusual, progressive character may be due to the influence of lodges (he counted some fifty emparked estates in Saxton's map of the shire, of 1570) and the grand example of a through-hall at Hardwick. Behind a two-storey enclosed entrance porch (illustration, right), the hall is entered at the centre of one end. On the left are two parlours separated by a stairhall, on the right a kitchen and buttery. Corner towers on the garden front, now linked by the additional upper floor above the gallery range, provide further rooms.

A rococo gothick fireplace in the house follows a published design by Batty Langley. 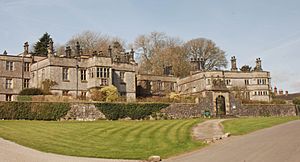 The Hall is open to the public at specified times of the year and is available for commercial and private functions.

The Hall is Grade II* listed, the second-highest designation. The garden terraces and walls, stable block, staff quarters and outbuildings, and entrance gates are separately listed, all at Grade II.

All content from Kiddle encyclopedia articles (including the article images and facts) can be freely used under Attribution-ShareAlike license, unless stated otherwise. Cite this article:
Tissington Hall Facts for Kids. Kiddle Encyclopedia.