Titusville is an unincorporated community located within Hopewell Township in Mercer County, New Jersey, United States. The area includes a post office with its own ZIP code (08560), a small village of homes, and a large park dedicated to George Washington's crossing of the Delaware River in 1776. Titusville was added to the National Register of Historic Places in 1983. 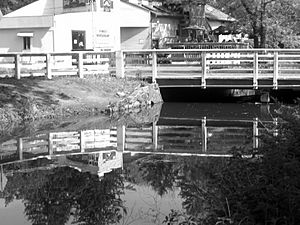 Titusville's central feature is a small village that sits on a bluff overlooking a picturesque stretch of the Delaware River with stairwells connecting the village to private docks on the river. The Delaware & Raritan Canal runs parallel to the river just to the east of the village, which is connected to River Road (Route 29) by several two-lane bridges. A biking/walking trail follows the canal, constructed when the former Belvidere-Delaware Railroad line was removed in the early 1980s. Opposite the canal from the river, extending eastward, are a number of small residential streets, a county park centered about Baldpate Mountain, and the homes ringing the base of the mountain and county park.

Each year on Christmas Day, General George Washington's crossing of the Delaware River is commemorated at Washington Crossing just south of Titusville. The annual reenactment depicts General Washington's December 25, 1776 nighttime river crossing and the attack on the morning of December 26 on the Hessian troops in Trenton, which was one of the key battles of the American Revolutionary War. Re-enactors assemble on the Pennsylvania side of the river, where their commander reads Thomas Paine's pamphlet, The American Crisis. The soldiers then climb into boats and cross the river, though the crossing is often canceled due to weather and speed of river.

Washington Cross State Park includes a Visitor Center that features the Harry Kels Swan Collection of Revolutionary War artifacts. Nearly 900 military items from the American and British Armies are included in the collection. The center also includes interpretive history exhibits that cover the Revolutionary War from its prelude in 1758 to the signing of the Treaty of Paris in 1783.

The park's natural area consists of 140 acres (0.57 km2) of mixed hardwood forests and fields that offer locations for hiking, picnics, nature walks and cross-country skiing. The Nature Center offers exhibits, displays, and educational programs for children, families and school groups. During warmer months, concerts and plays are held at the nearby Open Air Theatre.

The park is also home to the annual Spirit of the Jerseys State History Fair. The fair features historical programs, exhibits and hands-on interpretive activities.

Titusville is home to Janssen Pharmaceuticals Inc., a division of Johnson and Johnson.

In 1851, the Belvidere-Delaware Railroad opened to Titusville and a station was built in the town. Passenger service ceased at Titusville in April 1952 but passenger trains to other towns continued operating until October 1960. Freight remained until March 1976. The line was abandoned in 1977 and subsequently demolished for a recreational trail along the canal in the early 1980s.

The town is bisected by state New Jersey Route 29, a busy road that conveys traffic along the Delaware River.

Washington Crossing State Park is an 800-acre (3.2 km2) tract of woods, fields, and streams. The park covers the gradual slope from Bear Tavern Road down to Delaware River.

The southern boundary of the Central Delaware Valley AVA, an American Viticultural Area, is near Titusville, New Jersey, and its northern border is near Musconetcong Mountain.

All content from Kiddle encyclopedia articles (including the article images and facts) can be freely used under Attribution-ShareAlike license, unless stated otherwise. Cite this article:
Titusville, New Jersey Facts for Kids. Kiddle Encyclopedia.