Toby Run is a tributary of the Susquehanna River in Montour County, Pennsylvania. It is approximately 1.7 miles (2.7 km) long and is entirely in Mahoning Township. The stream's watershed has an area of 0.9 square miles (2.3 km2). There are ravines known as the Toby Run Ravines in the vicinity of the stream. They are designated as a "Locally Significant" site in the Montour County Natural Areas Inventory. Additionally, the Danville State Hospital is located in the area of the stream. 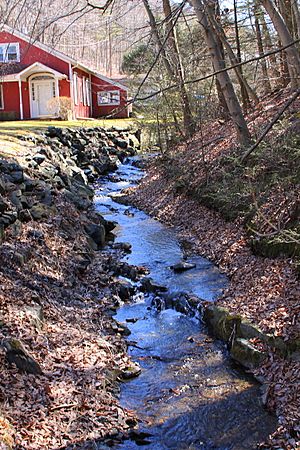 Toby Run begins in hills in southern Mahoning Township. It flows southwest and then west or northwest for a short distance before making a sharp turn southwest. The stream then passes by a reservoir and a state hospital and leaves the hills that it started in. Shortly after this, it reaches its confluence with the Susquehanna River near the southern edge of Mahoning Township.

Toby Run flows through a group of ravines for at least part of its distance. The ravines are known as the Toby Run Ravines and are located in Mahoning Township and Cooper Township. The ravines are relatively narrow. There is also a plateau in the watershed of the stream.

Toby Run is close to Danville.

Historically, there was a community known as Toby Town in the vicinity of Toby Run and a nearby insane asylum. It was named after a "large and powerful" Native American known as Toby. It is unknown if this community was near the stream's mouth or on a nearby ridge.

Most of the plants in the Toby Run ravines are hemlock. However, the vegetation in the ravines, which includes forests, is described as "interesting and diverse" in the Montour County Natural Areas Inventory. Trees such as tulip poplar, beech, and sugar maple are also present in the area. The canopy in the area consists of hemlock and northern hardwood trees. Non-native species such as Norway maple, multiflora rose, garlic mustard, autumn olive, and tree-of-heaven are slowly become more prevalent in the ravine.

An insect known as the hemlock woolly adelgid poses a threat to the hemlock trees in the vicinity of Toby Run.

All content from Kiddle encyclopedia articles (including the article images and facts) can be freely used under Attribution-ShareAlike license, unless stated otherwise. Cite this article:
Toby Run Facts for Kids. Kiddle Encyclopedia.