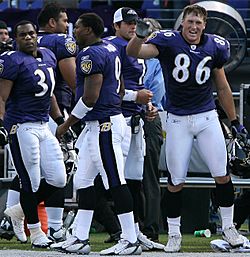 Heap wore #80 while playing college football and #86 as a professional. With Baltimore, Heap was known for his quiet personality. Heap's NFL career with the Ravens and Cardinals has been plagued by injuries. He has missed portions of most of his NFL seasons and huge parts of the 2004, 2007, and 2011 NFL seasons. However, he is the Ravens second all-time leader in receptions (the Ravens offense struggled much during Heap's stay there, and Heap was often the primary receiver), and all-time leader in yards and touchdowns. He was released by the Ravens in the 2011 offseason, and signed with the Cardinals, where he struggled to produce. Heap has also taken a number of big hits. He has been greatly popular with the Ravens fan base.

All content from Kiddle encyclopedia articles (including the article images and facts) can be freely used under Attribution-ShareAlike license, unless stated otherwise. Cite this article:
Todd Heap Facts for Kids. Kiddle Encyclopedia.