It lies between Bullhead City and Lake Havasu City and southeast of Needles, California, on the California–Arizona border.

Topock Marina located just off I-40 on Historic Route 66. Situated on the Colorado River between Needles and Lake Havasu City, the Marina is the traditional refueling point for boaters traveling between these two cities.

Topock is the site of one of Pacific Gas & Electric (PG&E)'s recompression stations on its super-rich natural gas pipeline from Texas to San Francisco completed in 1930.

Topock was originally called Mellen, a railroad station and steamboat landing, at the site where the Atlantic and Pacific Railroad built the Red Rock Bridge, a steel cantilever bridge across the Colorado River in May 1890 after three of its earlier less well built bridges had been washed away by the river upstream at a poorly chosen site at Eastbridge, southeast of Needles, California. The town was named for Captain "Jack" Mellon, a 40-year veteran Colorado River steamboat captain and an owner of the Colorado Steam Navigation Company, though it was misspelled as "Mellen." From 1903 to 1909 Mellen had its own post office. 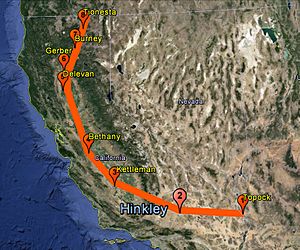 In the 1950s and 1960s, at both Topock and Hinkley compressor stations, hexavalent chromium in the form of an additive was used in rust-prevention in "the cooling towers that prepared the gas for transportation through PG&E’s pipeline to northern and central California." These cooling waters were then disposed of "adjacent to the compressor stations."

Topock Compressor Station is located in eastern San Bernardino County, approximately 12 miles southeast of Needles, California, along the Colorado River. In 1996 following the Hinkley groundwater contamination lawsuits related to the dumping of hexavalent chromium, PG&E began "an investigation and cleanup process governed by the federal Resource Conservation and Recovery Act (RCRA) and the Comprehensive Environmental Response, Compensation, and Liability Act of 1980 (CERCLA). PG&E continues to provide reports on their soil investigation and remedial activities at the Topock compressor station site regarding potential future impacts to the Colorado River and to Arizona's groundwater. 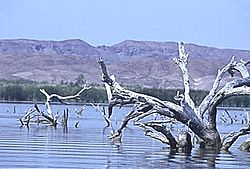 Some fish are probably hanging around these trees

On the eastern side of the site is Five Mile Landing, and at the southern end along the Colorado can be found Catfish Paradise.

All content from Kiddle encyclopedia articles (including the article images and facts) can be freely used under Attribution-ShareAlike license, unless stated otherwise. Cite this article:
Topock, Arizona Facts for Kids. Kiddle Encyclopedia.