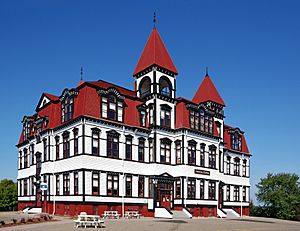 Lunenburg Academy, which is a National Historic Site of Canada and a UNESCO World Heritage site

Attractions outside of the Halifax regional municipality include the following:

Nova Scotia has a highly developed highway system which allows for road transportation between various communities and tourism sites within the province. Maritime Bus provides road transportation to/from Nova Scotia from the neighbouring province of New Brunswick. Marine Atlantic also provides two ferry links to the communities of Argentia and Port aux Basque, both in the province of Newfoundland and Labrador.

Nova Scotia is connected to Montreal by the Ocean, a train operated by Via Rail. It is also connected to the rest of Canada and the world by Halifax Stanfield International Airport.

All content from Kiddle encyclopedia articles (including the article images and facts) can be freely used under Attribution-ShareAlike license, unless stated otherwise. Cite this article:
Tourism in Nova Scotia Facts for Kids. Kiddle Encyclopedia.