CSS Acadia is a former hydrographic surveying and oceanographic research ship of the Hydrographic Survey of Canada and its successor the Canadian Hydrographic Service.

Acadia served Canada for more than five decades from 1913 to 1969, charting the coastline of almost every part of Eastern Canada including pioneering surveys of Hudson Bay. She was also twice commissioned into the Royal Canadian Navy (RCN) as HMCS Acadia, the only ship still afloat to have served the RCN in both World Wars. Today she is a museum ship, designated as a National Historic Site of Canada, moored in Halifax Harbour at the Maritime Museum of the Atlantic.

Retaining her original engines, boilers and little-changed accommodations, she is one of the best preserved Edwardian ocean steamships in the world and a renowned example of Canada's earliest scientific prowess in the fields of hydrography and oceanography.

Acadia was designed in Ottawa by Canadian naval architect R.L. Newman for the Hydrographic Survey of Canada and built by Swan Hunter & Wigham Richardson at Newcastle-on-Tyne in England. Named after Acadia, the early colonial name for Atlantic Canada, she was launched on May 8, 1913. Acadia arrived in Halifax on July 8 and was commissioned that July upon her first voyage using the prefix CGS, which stood for "Canadian Government Ship." She saw extensive use prior to 1917 surveying the waters along Canada's Atlantic coast, including tidal charting and depth soundings for various ports. Her first two seasons were spent charting in Hudson Bay at Port Nelson and the entrance to Hudson Bay to open the way for a grain port for Manitoba. In her first year she also made the first Canadian surveys of notorious Sable Island and rescued the crew of the steamship Alette, crushed by ice in Hudson Bay, the first of many rescues the rugged Acadia would make. Among her more enduring work was a survey of the Bay of Fundy which became her longest assignment prior to entering military service in World War I. 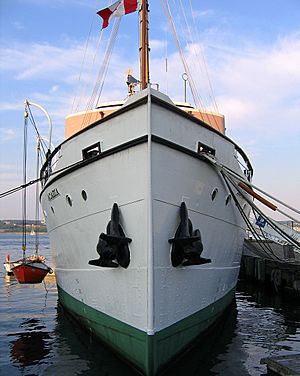 Bow of CSS Acadia with dory lowered on her starboard davits

After the outbreak of war in 1914, Acadia was among the government vessels used to patrol the Bay of Fundy during the winter months, sailing between Yarmouth, Nova Scotia and Grand Manan. CGS Acadia was commissioned into the Royal Canadian Navy on January 16, 1917 as a patrol vessel, replacing the CGS prefix with HMCS, thus becoming HMCS Acadia. The vessel was armed with one 4-inch (102 mm) gun placed forward. From 1917 until March 1919, she conducted anti-submarine patrols from the Bay of Fundy along Nova Scotia's Atlantic coast and through the Gulf of Saint Lawrence. On December 6, 1917, less than twelve months into her wartime service, HMCS Acadia survived the disastrous Halifax Explosion. Acadia was serving as guard ship at the entrance to Bedford Basin but suffered only minor damage. Near the end of the war she served as a platform for experiments with anti-submarine balloons.

Following the armistice, HMCS Acadia was returned to the Hydrographic Survey of Canada (renamed the Canadian Hydrographic Service in 1928) where she regained her original prefix CGS Acadia and resumed hydrographic survey work throughout the inter-war period of the 1920s and 1930s. Lack of survey funds suspended her operation in 1924 and 1925. In 1926 she resumed surveys and became the first Canadian research vessel to be fitted with an echo sounder. A major achievement were surveys to establish the port of Churchill, Manitoba. Acadia also performed pioneering Canadian oceanographic research. In 1929 Acadia rescued the crew of a crashed Sikorsky amphibious aircraft named "Untin Bowler" who were attempting a round-trip to Europe across Greenland and Iceland sponsored by the Chicago Tribune until the aircraft was destroyed by ice off the tip of Labrador. 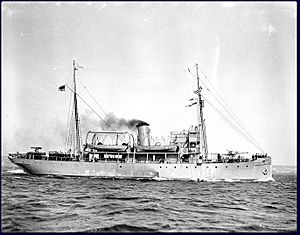 In her armed wartime guise as HMCS Acadia 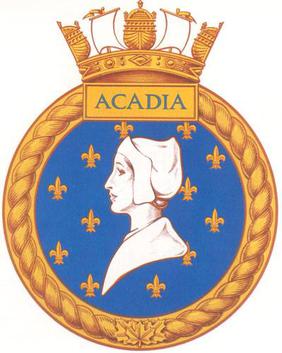 CGS Acadia was recommissioned into the Royal Canadian Navy in October 1939, once again becoming HMCS Acadia. She was first used as a training ship for HMCS Stadacona, a shore establishment in Halifax. From May 1940 to March 1941 she saw active use as a patrol ship off the entrance of Halifax Harbour, providing close escort support for small convoys entering and leaving the port from the harbour limits at the submarine nets off McNabs Island to the "Halifax Ocean Meeting Point". After a refit, HMCS Acadia was assigned in mid-1941 for use as an anti-aircraft training ship and serving as a gunnery training vessel for crews of the Defensively Equipped Merchant Ships (DEMS) fleet. In June 1944, HMCS Acadia was assigned to the training base HMCS Cornwallis and stationed at the nearby port of Digby, Nova Scotia where she was used for gunnery training for recruits and advanced gunnery training for petty officers and officers. Her wartime name of HMCS Acadia continues in use today for the Sea Cadet summer training camp held at the ship's old base at Cornwallis. 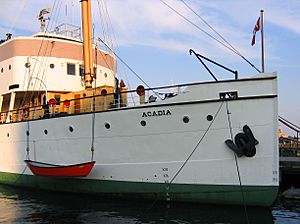 Starboard bow of CSS Acadia, with dory lowered on davits

With the end of the war, HMCS Acadia was paid off by the RCN on November 3, 1945, and returned for the second time to the Canadian Hydrographic Service as CSS Acadia, the new acronym standing for Canadian Survey Ship. A major post-war assignment was updating and expanding the nautical charts of Newfoundland and Labrador after the province joined Canada in 1949. In 1962, Acadia rescued hundreds of people from forest fires in Newfoundland, evacuating two towns. In addition to her work with the CHS, CSS Acadia participated in military survey assignments for the Royal Navy, Royal Canadian Navy, and United States Navy. By the end of her career, Acadia had charted almost every region of Atlantic Canada as well as much of the Eastern Arctic.

She was retired from active service on November 28, 1969, and was transferred to the Bedford Institute of Oceanography (BIO) for use as a museum ship. Acadia was declared a National Historic Site in 1976. On February 9, 1982, the BIO transferred CSS Acadia to the Maritime Museum of the Atlantic for preservation and interpretation. She is moored at the Museum's North Wharf and open to visitors from May to October. In September 2003 she rode out Hurricane Juan with ease, despite being the oldest vessel in Halifax Harbour. Acadia is known for being one of the last ships in Halifax that was home to an official ship's cat used for rodent control. Acadia is drydocked every five years to preserve her hull, formerly at the Dartmouth Marine Slips and at Halifax Shipyard in more recent years.

In the summer Acadia is joined at the Museum wharves by HMCS Sackville, operated by the Canadian Naval Memorial Trust. The two nearly identically sized ships present a contrast in shipbuilding eras and offer an ironic comparison as Sackville is a warship which became a part-time hydrographic ship and Acadia is a hydrographic ship which became a part-time warship.

Acadia is the only known vessel still afloat to have survived the Halifax Explosion in 1917. Every year on the December 6 anniversary of the explosion, Acadia hoists exactly the same signal flags she flew on the day of the explosion.

Acadia has been used in a number of films to depict other vessels. These include:

Most of Acadia's crew came from the Eastern Shore of Nova Scotia. Many served their entire careers aboard, an indication that she was regarded as a "happy ship". Many of her officers were from Newfoundland. As a hydrographic ship, the Hydrographer in Charge was the senior officer, deciding where Acadia went and what she did, while the Captain ran the ship's day-to-day operations. In wartime, naval officers took over. 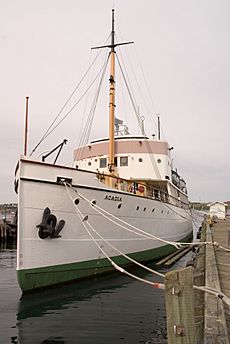 Named after the famous Viking, Erik the Red was a tabby cat, born about 1997, that served on Acadia as the rodent control officer. He is believed to have been a stray that found his way aboard the ship as a stowaway on Canada Day in 2000. He initially worked alongside the existing rodent control officer, Clara, until Clara's retirement and quick decline in health. Erik the Red survived three cat-nappings, or disappearances, which were particularly worrisome for the community because Erik had medical concerns requiring daily medication or he would not eat. Erik became a well known local attraction on the boardwalk near Acadia, welcomed up and down the waterfront and into stores. Erik retired in 2015 during a party in his honor on September 20 and died in July 2017 after a short illness.

All content from Kiddle encyclopedia articles (including the article images and facts) can be freely used under Attribution-ShareAlike license, unless stated otherwise. Cite this article:
CSS Acadia Facts for Kids. Kiddle Encyclopedia.