Tourtière is a Canadian meat pie dish originating from the province of Quebec, usually made with minced pork, veal or beef and potatoes. Wild game is sometimes used. A traditional part of the Christmas réveillon and New Year's Eve meal in Quebec, it is also popular in New Brunswick, and is sold in grocery stores across the rest of Canada all year long.

Tourtière is not exclusive to Quebec. It is a traditional French-Canadian dish served by generations of French-Canadian families throughout Canada and the bordering areas of the United States. In the New England region of the U.S., especially in Maine, Rhode Island, Vermont, New Hampshire, and Massachusetts (e.g., Chicopee and Attleboro), late 19th and early 20th century immigrants from Quebec introduced the dish.

There is no one correct filling; the meat depends on what is regionally available. In coastal areas, fish such as salmon is commonly used, whereas pork, beef, rabbit and game are often included inland. The name derives from the vessel in which it was originally cooked, a tourtière.

Tourtière du Lac-Saint-Jean has become the traditional and iconic dish of the region of Saguenay, Quebec since the Second World War, and it has undergone several metamorphoses.

During the 18th century, "sea pie" became popular among French and British colonists, and it seems to be "the direct forerunner of the tourtière of Lac-Saint-Jean".

Tourtière has been called "an example of 'the cuisine of the occupied,' food that is French by way of the British, who took Quebec in 1759." 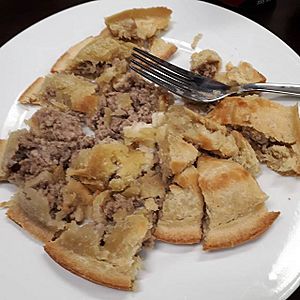 The tourtières of the Saguenay-Lac-Saint-Jean area and Eastern Quebec are slow-cooked deep-dish meat pies made with potatoes and various meats (often including wild game) cut into small cubes.

Tourtière in Montreal is made with finely ground pork only (which can be hard to find as the meat is often ground too coarsely elsewhere). Water is added to the meat after browning, and cinnamon and cloves give it a distinctive flavour. Many people use ketchup as a condiment, though the tourtière is also often eaten with maple syrup or molasses, or cranberry preserves.

Although it is less popular than the original tourtière and the tourtière du Lac-Saint-Jean, this version can also be commonly found throughout Canada and its surrounding areas.

Acadian tourtière, or pâté à la viande (pâté is casserole or pie), is a pork pie that may also contain chicken, hare and beef. Pâté à la viande varies from region to region in New Brunswick, Nova Scotia and Prince Edward Island. In Petit-Rocher and Campbellton the dish is prepared in small pie plates and known as petits cochons (little pigs).

All content from Kiddle encyclopedia articles (including the article images and facts) can be freely used under Attribution-ShareAlike license, unless stated otherwise. Cite this article:
Tourtière Facts for Kids. Kiddle Encyclopedia.