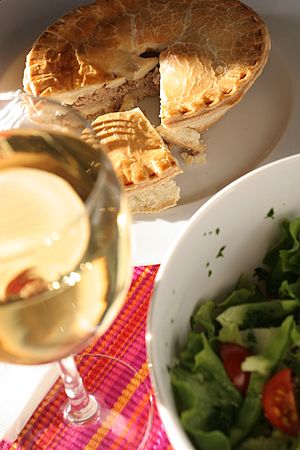 Contrary to popular belief, the name “tourtière” does not come from the tourte voyageuse - the now extinct species of bird that used to be the most popular meat for tourtière. Rather, its name comes from a kind of container in which precursors to the tourtières of today were cooked. The oldest known recipe for a tourtière-like dish is found in the 13th-century work Liber de Coquina, in which “Torta parmigiana” is depicted with at least six layers of different ingredients.

All content from Kiddle encyclopedia articles (including the article images and facts) can be freely used under Attribution-ShareAlike license, unless stated otherwise. Cite this article:
Tourtière du Lac-Saint-Jean Facts for Kids. Kiddle Encyclopedia.