The first settlements around the lake go back to the fifth century. The Romans later called the Lake Lacus Felix (the happy lake). The first time the lake was mentioned in a document was in 909 AD. Then it was called Trunseo.

The Traunsee is a popular destination for tourists. It is possible to swim in the traunsee. The water quality is very good. The average water temperature in August reaches 19 °C (66 °F). Other water sports are also possible: Sailing, Surfing and Diving. [1] 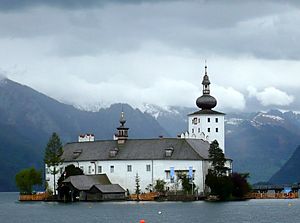 On a small island in Gmunden is the Schloss Ort. It is a small, medieval Castle built in 1080.

All content from Kiddle encyclopedia articles (including the article images and facts) can be freely used under Attribution-ShareAlike license, unless stated otherwise. Cite this article:
Traunsee Facts for Kids. Kiddle Encyclopedia.