A triangle is a shape, or a part of two dimensional space. It has three straight sides and three vertices. The three angles of a triangle always add up to 180° (180 degrees). It is the polygon with the least possible number of sides. A triangle with vertices A, B, C is written as 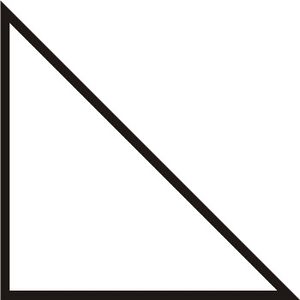 This is an isosceles right triangle, because it has a right angle and two of its sides have the same length.

Triangles can be grouped according to how many of their sides are equal:

Triangles can also be grouped by their angles:

Triangles are extremely useful. The study of geometry related to triangles is called trigonometry. Some people have spent their entire lives studying triangles for use in trigonometry.

All content from Kiddle encyclopedia articles (including the article images and facts) can be freely used under Attribution-ShareAlike license, unless stated otherwise. Cite this article:
Triangle Facts for Kids. Kiddle Encyclopedia.