Trimerocephalus is a genus of eyeless trilobites from the order Phacopida, family Phacopidae. It lived during the final stage of the Devonian, the Famennian, and became extinct at the end of this stage, together with all other trilobites with the exception of some Proetida. It can be found in Australia, the Czech Republic, France, Germany, Iran, Kazakhstan, Morocco, Poland, the Russian Federation (Urals), Spain, and the United Kingdom (England).

Species belonging to the genus Trimerocephalus have been found in Europe, Morocco, Iran and Australia. 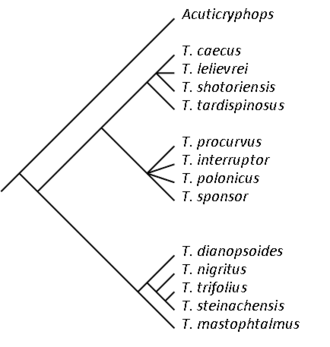 the relationships between species assigned to Trimerocephalus

Trimerocephalus is one of several phacopid genera that is eyeless (others being Dianops, Ductina, and Trimerocephaloides). The dorsal facial sutures are not functional, so cranidia and free cheeks (or librigenae) are not found separated. The marginal ridge bordering the cheeks is wide and convex. The part of the margin that is tucked-under (or doublure) and only visible when viewing the cephalon from the belly (or ventral side), is short and flat. The vincular furrow, a groove that fits the margin of the tailpiece or pygidium when the animal was enrolled, is wide and deep. The pygidium is about 3 times wider than long.

All content from Kiddle encyclopedia articles (including the article images and facts) can be freely used under Attribution-ShareAlike license, unless stated otherwise. Cite this article:
Trimerocephalus Facts for Kids. Kiddle Encyclopedia.