Trini Kwan is the female Yellow Ranger in Power Rangers. She is portrayed by Vietnamese-American actress Thuy Trang.

Trini was originally portrayed by actress Audri Dubois in the unaired pilot episode, but when the show was picked up for television, for which a new pilot was filmed, she was played by the late Thuy Trang, around whom the character was rewritten. Trini appears in the 2017 reboot film, played by Mexican-American singer Becky G.

In Mighty Morphin Power Rangers, Trini makes her first appearance performing a Kata on the first episode. When Rita Repulsa escapes and begins wreaking havoc on earth, Trini, along with her close friends Jason Lee Scott, Zack Taylor, Billy Cranston and Kimberly Hart, is one of the five teens chosen by Zordon to receive a great power, drawn from the spirits of the prehistoric animals. These powers give them the ability to transform into a fighting force known as the Power Rangers. Trini is chosen for her compassion, quick wits, and martial arts talent, and becomes the Yellow Power Ranger, given the Saber-Toothed Tiger Power Coin and the Saber-Toothed Tiger Dinozord.

Trini is well-versed in kung fu. She would later become proficient in the art of Praying Mantis Kung Fu, mirroring Thuy Trang's real-life training in the martial art. Trini's signature fighting style included lightning-fast maneuvers, and powerful high kicks. She attempts to neutralize foes with the least amount of force. Trini is one of the intellectuals of the team, often having to translate Billy's techno talk for the other Rangers.

Generally soft-spoken and polite, Trini is a calm and warm person. She is an environmentalist. She is prepared to both push herself and put herself in danger for those she loves.

In Season 2, with the arrival of new nemesis Lord Zedd, the Rangers are given the new Thunderzords to battle Zedd's monsters, which are significantly more powerful than those created by Rita. Trini is given the new Griffin Thunderzord.

Also, during the earlier part of the season, Trini is courted by a new student in school named Richie. Initially, they both are too nervous to speak to each other, but eventually Richie gathers the courage to ask Trini on a study date. 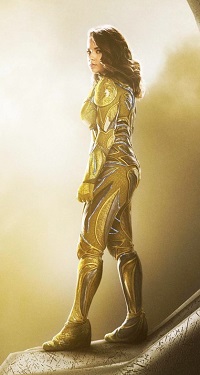 Becky G as Trini in the 2017 film Power Rangers.

In the 2017 film, which is a modern-day reboot of the original Power Rangers series, Trini is portrayed by Mexican-American singer Becky G. She is depicted more closely to as originally going for the television series as a teen of Mexican origin. Her portrayal has gained fame for being the first gay superhero in film. Trini reveals that Angel Grove is her third school in three years as her family often moved around, but she tends to avoid interaction with others, to the extent that she has been in Kimberly's biology class for a year and Kimberly never noticed her.

Trini trains with the team, having met them while practicing martial arts in the mine where Billy found the Power Coins, despite them meeting Zordon and Alpha before Zack even asks for her name, she comes to form a closer bond with the group. When Rita attacks Trini on her own and "offers" to spare her if Trini will tell her the location of the Zeo Crystal, Trini warns the rest of the team. After they manage to morph into their ranger suits, Trini joins the other Rangers in attacking Goldar in their zords before they form the Megazord for the first time.

Kimberly is the main character in this comic book mini series published by Boom! Studios. The series is a modern-day remake but also serves as a continuation from Kimberly's exit in the third season of Mighty Morphin Power Rangers. Kimberly needs to rescue a French town under siege from Goldar. She seeks help from Zordon who uses the Sword of Light to activate the latent pink energy within her. Kimberly then teleports to Zack and Trini in South America for their help. Zordon uses the Sword of Light to share Kimberly's power with them. Trini once again becomes the yellow ranger. It is also revealed that Trini and Zack are in a relationship.

All content from Kiddle encyclopedia articles (including the article images and facts) can be freely used under Attribution-ShareAlike license, unless stated otherwise. Cite this article:
Trini Kwan Facts for Kids. Kiddle Encyclopedia.