Billy Cranston is a fictional character in the Power Rangers universe. He is the Blue Ranger in the series Mighty Morphin Power Rangers, and was portrayed by actor David Yost. Billy is the only original Power Ranger to remain for the entire MMPR series, and is the second longest-serving Ranger overall behind Tommy Oliver. Until his departure, he was considered the brains of the Power Rangers team, creating many gadgets with which to solve problems that not even Zordon foresaw, and he even invented the first team's wrist-worn communication devices.

William "Billy" Cranston appears in a the 2017 reboot, played by actor RJ Cyler. In this version, he is autistic unlike in the TV series. At the start of the film, he is the archetypal nerd who is targeted by bullies. When Jason defends Billy from a bully during detention, Billy thanks Jason by deactivating his ankle monitor. The two then sneak off to an abandoned mine where Billy used to go with his deceased father. Eventually, along with Kimberly, Trini, and Zack, they come across the Power Coins and discover their destinies as the new Power Rangers. Initially, Billy expresses the most enthusiasm over being a Ranger, being the first to morph when he breaks up a fight between Jason and Zack, albeit accidentally. He is killed by Rita after she forces him to reveal the location of the Zeo Crystal, but Zordon sacrifices a chance to restore his own body to bring Billy back to life. When they morph for the first time and take the zords into battle, Billy initially accidentally 'drives' his zord backwards before turning it around in time for the final confrontation with Goldar.

In Power Rangers Turbo, the fifth season of the series (and later in a few episodes of Power Rangers in Space), a mysterious Power Ranger with the ability to become invisible showed up and became an ally for the Turbo Rangers, who nicknamed him Phantom Ranger. His identity was never revealed, but Judd Lynn, executive producer of Turbo and Space, revealed that if he had to give the character an origin now, he would have made him a past Ranger and fixed on Billy as a potential, but stressed that this was only a brainstorm after the fact. 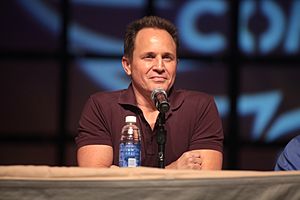 David Yost has stated he had walked off the show a few episodes prior to his character's departure, due to repeated and ongoing homophobic slurs by the creators, producers, directors, and writers of the series, which is why he does not appear in them. However, producer Scott Page-Pagter has denied these statements, claiming Yost left over a salary dispute and had conflicts with members of the crew. As a result, stock footage of Yost was used for his departure and the character was voiced by someone else (In broadcasting Billy's departing message to his friends, it was mentioned they were having trouble with the signal). He was also the last of the original Power Ranger team to leave the show, although his former teammate Jason had returned as the Gold Ranger at that time.

It was widely believed that Billy's surname came from Bryan Cranston, who did voice work for Mighty Morphin' Power Rangers, and would later portray Zordon in the 2017 film. Bryan Cranston was told this and it was later confirmed to him from an unknown source. However, in recent years, promotional material for an attempted Bioman adaptation by Haim Saban, from 1984, revealed that the surname was decided on long before Cranston became involved with the series.

All content from Kiddle encyclopedia articles (including the article images and facts) can be freely used under Attribution-ShareAlike license, unless stated otherwise. Cite this article:
Billy Cranston Facts for Kids. Kiddle Encyclopedia.