Tropiquaria Zoo is a small tropical house and zoo in West Somerset, England. It is located 16 miles (26 km) from Taunton and 9 miles (14 km) from Minehead.

It is based in a 1930s art deco BBC radio transmitter hall of Washford transmitting station, which is now a Grade II listed building.

A zoo has been run from this site since the early 1990s. There is a mainly African theme to the tropical hall and aquarium as well as the large number of outside enclosures. The zoo is a member of BIAZA, the British and Irish Association of Zoos and Aquariums, and has successfully bred a number of endangered species of mammals, reptiles, birds, and fish.

Tropiquaria includes a Tropical Hall with a variety of snakes and lizards, and birds. The zoo also features an aquarium with several species of endangered, critically endangered and even extinct in the wild species of fish. Outside are macaws, helmeted curassow, cockatoos, parrots, agoutis, gibbons, serval, wildcats, wallabies, emus, rheas, tapir, cotton-top tamarins, red-handed tamarins, ring-tailed lemurs, ruffed lemurs, brown lemurs, coatis, yellow mongoose and meerkats amongst many others. 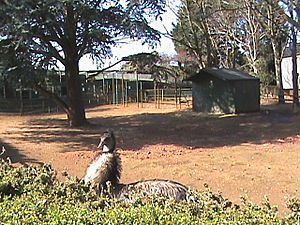 All content from Kiddle encyclopedia articles (including the article images and facts) can be freely used under Attribution-ShareAlike license, unless stated otherwise. Cite this article:
Tropiquaria Facts for Kids. Kiddle Encyclopedia.