Tsaagan meaning "white" is a dinosaur related to Velociraptor. It is in the family Dromaeosauridae. It lived in Asia about 75 million years ago. It was discovered in the Djadokhta Formation of the late Cretaceous of Mongolia.

When it was discovered, it was thought to be a species of Velociraptor. After a CAT-scan in 1998, scientists found that it represented a new genus. In 2010 it was discovered that it was closely related to Linheraptor. They are probably in the same genus. 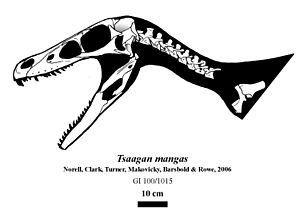 shows the bones they actually found

All content from Kiddle encyclopedia articles (including the article images and facts) can be freely used under Attribution-ShareAlike license, unless stated otherwise. Cite this article:
Tsaagan Facts for Kids. Kiddle Encyclopedia.