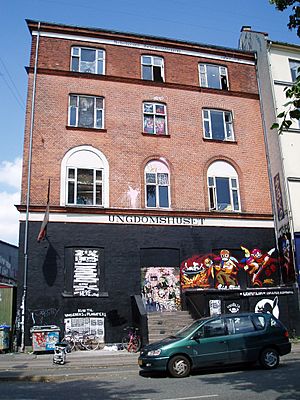 Ungdomshuset as seen from the street

Ungdomshuset (in English: "the Youth House") was the popular name of the building formally named Folkets Hus ("House of the People") on Jagtvej 69 in Nørrebro, Copenhagen. The Ungdomshuset was a meet point for many anarchists, for the music in the underground scene and leftist groups from 1982 until 2007, when after a long conflict between the municipal government of Copenhagen and the people living there, was smashed. Police started to clear the building early on Thursday, 1 March 2007. Demolition began on 5 March 2007 and was completed two days later. Ever since the eviction in March 2007, former users and supporters have held weekly demonstrations for a new Ungdomshuset, the demonstrations starting from nearby square 'Blågårds Plads' every Thursday at 5 p.m. and going to various places in Copenhagen. The starting point has recently been changed to Gammel Torv in response to the demonstraters saying they are getting closer to the politicians concerning a solution for a new Ungdomshus at an old school.In the summer of 2007, an iniative known as G13 wanted to squat an old public waterwork on Grøndalsvænge Allé 13 in northwestern Copenhagen to be used as a new Ungdomshuset, the squat was non-violent, but was met with heavy opposition from the police who arrested 436 people and threw large amounts of tear gas

The building was completed on 12 November 1897, with the name "Folkets Hus" (The People's House). The house functioned as one of the resorts for the then-incipient labour movement of Copenhagen. Since labour organisations were unpopular in the eyes of the authorities. Years later the place helped poor people and was used for others uses. In 1918 when workers stormed the Danish Stock Exchange (Børsen). In 1910, The Second International held an International Women's conference at the house, during which Clara Zetkin launched the idea of an International Women's Day. Lenin and Rosa Luxemburg visited the centre. During the 1950s it was still primarily used by the different sections, associations and unions of the labour movement. All kinds of different activities took place: for example, boxing matches and end-of-season dances. Several years later Brugsen, a Danish chain of co-operative supermarkets, bought Folkets Hus, for makin a cheap supermarket. However, as this was prohibited by authorities for the historic importance of the place, so Brugsen sold the ground to the folk music ensemble Tingluti in 1978. The Tingluti sold the ground to the municipality of Copenhagen after few time.The price at the time was DKK 700,000. In 1982 Folkets Hus was assigned to a group of young people — the original founders of Ungdomshuset — however the municipality of Copenhagen still owned the building. It was at this time that the building was given its current name: Ungdomshuset. Nick Cave and Björk played there. In January 1996 Ungdomshuset was ravaged by a fire. It also had fungus and rot. The municipality of Copenhagen made plans to renovate the building for safety reasons, but encountered resistance from the occupants. In 1999 the building was put on sale to the highest bidder by the municipality, but same this time occupants opposed to the thing, and for jocking put over the build a large banner with the message "For sale along with 500 autonome, stone throwing, violent psychopaths from hell.". After that a company called Human A/S bought the building in December 2000 (although ownership did not actually change hands until 2001), after which Human A/S was sold to the independent Christian sect "Faderhuset. However, the squatters refused to leave the house. Until 1 March 2007 the young squatters used the house as if the change of ownership had not happened and the new owners were not allowed inside at any time. The Ungdomshuset received more than 500 visitors a week. 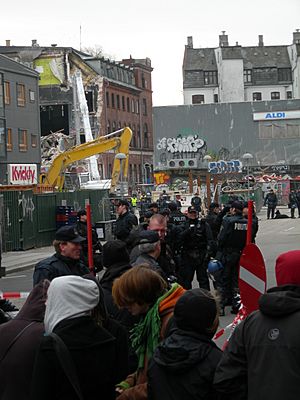 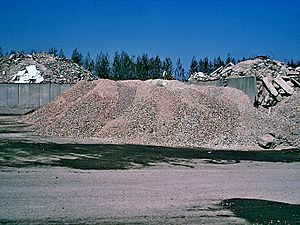 The debris was crushed for recycling and sold.

A women's demonstration took place on 8 March, comprising more than 3 000 people. The police carried out systematic identity controls. In total, more than 750 people were arrested during the events (among them, about 140 foreigners). On 16 March, 2007, Danish police admitted to having mistakenly used a potentially lethal form of teargas. The gas, known as Ferret 40, was used against crowds during the riots following the demolition, although it is designed to penetrate doors and walls.

According to professor Lars Dencik, from the University of Roskilde, the Danish state used the opportunity of this evacuation to test its anti-terrorist security forces (as any other opportunity, or real danger, was non-existent).

All content from Kiddle encyclopedia articles (including the article images and facts) can be freely used under Attribution-ShareAlike license, unless stated otherwise. Cite this article:
Ungdomshuset Facts for Kids. Kiddle Encyclopedia.