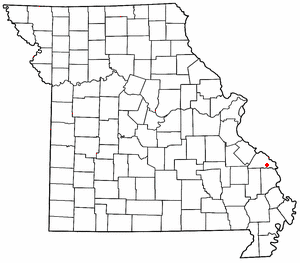 Uniontown is an unincorporated community located in Union Township in southeastern Perry County, Missouri. It is located on U.S. Route 61 ten miles southeast of Perryville.

Uniontown was originally known as Paitzdorf, and was named after the same village in Greiz county in Thuringia, Germany, where many of the settlers originated from. However, Paitzdorf became known as Uniontown during the Civil War era, as it served as an encampment for Union soldiers. The Union soldiers could not pronounce the name of the town, and referred to it as Uniontown.

Originally known as Paitzdorf, Uniontown is one of seven towns and villages in the area founded by the Rev. C. F. Gruber Auswanderung (Emigration) Group of Saxon-German immigrants in 1839. It and the others -- Altenburg, Dresden, Frohna, Johannisberg, Seelitz, and Wittenberg—were all named by settlers for towns in the Saxony region of their native country.

All content from Kiddle encyclopedia articles (including the article images and facts) can be freely used under Attribution-ShareAlike license, unless stated otherwise. Cite this article:
Uniontown, Missouri Facts for Kids. Kiddle Encyclopedia.