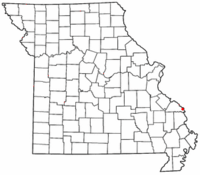 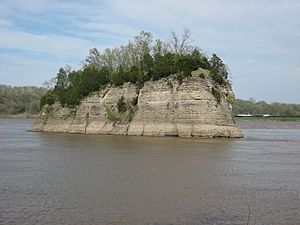 Wittenberg is one of seven towns and villages in the area founded by German Lutheran immigrants in 1839. It and the others—Altenburg, Dresden, Frohna, Johannisberg, Paitzdorf, and Seelitz—were all named by settlers for towns in the Saxony region of their native country. The city's namesake, Wittenberg, Germany, is important in Lutheran history as the place where founder Martin Luther started the Protestant Reformation.

The immigrant group would eventually form the backbone of the Lutheran Church–Missouri Synod, and they considered Tower Rock, nearby in the Mississippi River, to be their own version of Plymouth Rock in their search for religious freedom. At its high point, Wittenberg had as many as 400 residents. In addition to St. Paul's Lutheran church and one-room school, the town supported a brewery, a furniture factory, two grocery stores, a tavern, a flour mill, a cooperage, and two hotels.

Among Wittenberg's claims to fame is the last train robbery in Missouri. In November, 1922, a train bound for San Francisco, California from St. Louis was robbed approximately 2 miles (3.2 km) north of Wittenberg. Over $100,000 dollars was taken by Jack "Quail Hunter" Kennedy, a notorious train robber and last active member of the Jesse James gang. Unfortunately one of his two accomplices was secretly working undercover for the railroad police. When Kennedy and the other robber showed up to board their getaway autos, they were met by a host of law officers including two deputy sheriffs, three railroad special agents, and six postal inspectors. Not heeding demands to surrender, Kennedy reached for his weapon and both robbers were shot dead.

Floods in 1927 and 1973 badly damaged the town, destroying most of the businesses. The school closed in 1969. In 1980 the few remaining residents of Wittenberg took on the U.S Census Bureau. The official government tally was four. The village members were able to show proof that in fact the population was double that, with eight residents. Finally in 1983, with the population now five people, residents petitioned a Perry County judge to disincorporate the town, which was granted. The Great Mississippi and Missouri Rivers Flood of 1993 destroyed what little was left of the community. Today only a few house foundations, steps, and the paved riverfront boat dock remain. In 1994 the Lutheran Historical Society of Perry County erected a large marker on the site where the Wittenberg Lutheran Church once stood.

All content from Kiddle encyclopedia articles (including the article images and facts) can be freely used under Attribution-ShareAlike license, unless stated otherwise. Cite this article:
Wittenberg, Missouri Facts for Kids. Kiddle Encyclopedia.