Unity Pond (Lake Winnecook) is the largest lake in Waldo County, Maine. It is within the towns of Unity, Burnham, and Troy. The main tributaries are Meadow Brook, Bithers Brook, and Carlton Stream. The sole outflow is Twenty-Five Mile Stream, via a wetlands to the southwest of the lake, which in turn feeds into the Sebasticook River. The lake is surrounded by almost 300 residences, of which slightly more than half are seasonal. It is also used for boating, fishing, camping, and swimming. Kanokolus Beach on the southwest shore and Burnham Town Beach are both open to the public. 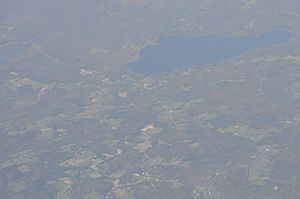 Europeans first settled Unity Pond in 1785. By the early 1800s, sawmills were established along the three main tributaries to the lake. By 1830, however, deforestation caused most of the sawmills to close. Deforestation made agriculture possible, which continued in the lands adjoining the lake well into the 20th century. Canneries were established in the area from the 1920s to the 1950s. As subsistence agriculture declined in the 1940s, it was replaced by poultry and dairy farming, and seasonal camps were built along the lake shore.

The lake has been subject to eutrophication caused historically by agricultural runoff and effluent from a canning factory, and is on the state Nonpoint Source Priority Watersheds list, owing to the occurrence of summer algal blooms caused by phosphorus nutrient addition by runoff water. The watershed area surrounding the pond consists of 16.2% developed land, 71.7% non-developed land (consisting mostly of forest), and 12.1% surface water. A total of 20 fish species are found in the lake, including 12 indigenous species. The lake is stocked with trout and alewife.

All content from Kiddle encyclopedia articles (including the article images and facts) can be freely used under Attribution-ShareAlike license, unless stated otherwise. Cite this article:
Unity Pond Facts for Kids. Kiddle Encyclopedia.