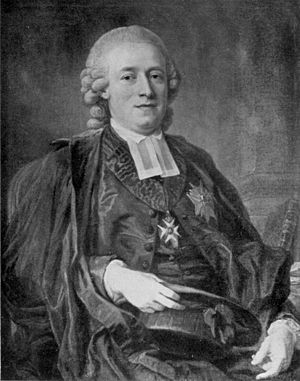 Uno von Troil, born 24 February 1746 in Stockholm, Sweden, dead 27 July 1803 at Sätra brunn, Sweden was a Swedish Lutheran clergyman. He was the Church of Sweden Archbishop of Uppsala between 1786-1803. He was the son of Samuel Troilius, who had also been archbishop.

All content from Kiddle encyclopedia articles (including the article images and facts) can be freely used under Attribution-ShareAlike license, unless stated otherwise. Cite this article:
Uno von Troil Facts for Kids. Kiddle Encyclopedia.