Kids Encyclopedia Facts
Not to be confused with Uwchlan Township, Chester County, Pennsylvania.

Upper Uwchlan Township (/ˈjuːklən/; [ˈɪuxlan]) is a township in Chester County, Pennsylvania, United States. The population was 11,227 at the 2010 census. The township included the community of Milford Mills before it was inundated by the creation of the Marsh Creek Dam in 1972.

The main population center of the township has grown surrounding the historic Eagle Tavern at the intersection of Route 100 and Little Conestoga Road. This major unincorporated community is known as the village of Eagle, but also sometimes known as Uwchland. That is the address of the local post office. Although the name "Uwchland" is the result of a spelling error made by the Postal Service in the 19th century when establishing the 19480 ZIP code, it has yet to be corrected. Much of the area surrounding the post office though is using the Chester Springs zip code of 19425. 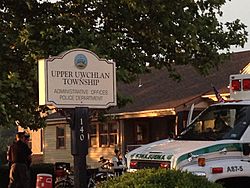 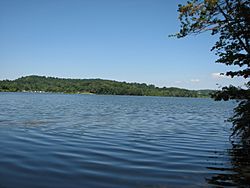 There were 2,132 households, out of which 55.0% had children under the age of 18 living with them, 81.7% were married couples living together, 4.5% had a female householder with no husband present, and 12.1% were non-families. 9.7% of all households were made up of individuals, and 1.8% had someone living alone who was 65 years of age or older. The average household size was 3.21 and the average family size was 3.46.

Upper Uwchlan Township is traversed by only one main state route, Route 100. PA Route 401 skims the northeastern edge of the township as well; the two routes meet in West Vincent Township. The Pennsylvania Turnpike/Interstate 76 also cuts through the township, crossing over Route 100 in the far southern section of the township. The actual double trumpet interchange between the two roads, however, is located a mile and a half south of the overpass, in Uwchlan Township.

Saint Elizabeth, a Catholic church, is located at 100 Fellowship Road, at Pottstown Pike. Just south of it, on Pottstown Pike, is Beth Israel Congregation of Chester County (founded 1904), Upper Uwchlan's only synagogue.

All content from Kiddle encyclopedia articles (including the article images and facts) can be freely used under Attribution-ShareAlike license, unless stated otherwise. Cite this article:
Upper Uwchlan Township, Chester County, Pennsylvania Facts for Kids. Kiddle Encyclopedia.