Valley Falls is a village in Rensselaer County, New York, United States. The population was 466 at the 2010 census. The village lies on the boundary of the towns of Pittstown and Schaghticoke, but is mostly in the northwest part of Pittstown. 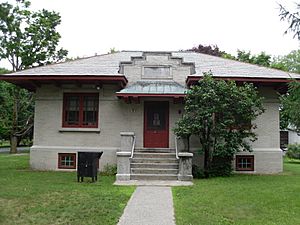 In 1871, Industrialist James Thompson built a textile mill in the village. Nearly all village residents worked in the mill and school kids ran home when the mill's lunch whistle sounded. After its height of operation in the 1970s it entered a decade of decline. The mill had been vacant for at least 10 years when went up in flames in the early morning hours on April 22, 2009. 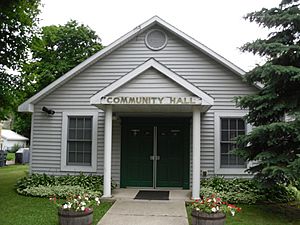 By 1863 Valley Falls had established itself as a mini-industrial center. In addition to the aforementioned Thompson textile mill, the village also had a blacksmith shop, farrier shop, foundry, wainwright shop, cooperage, vineyard, three general stores, and two hotels. At this time only a single rail line (Troy & Boston RR) from Troy came through the southern limit of the village heading to Johnsonville, New York. Later, a second rail line from Schaghticoke would follow the Hoosic River past Thompson's Mill also heading to Johnsonville. By the early 1970s the southern rail line was completely abandoned and had been largely dismantled; the northern line still functions to this day. However, with the closing of the Thompson mill the train no longer stops in Valley Falls.

The Adams–Myers–Bryan Farmstead was listed on the National Register of Historic Places in 2013.

There were 179 households out of which 42.5% had children under the age of 18 living with them, 55.9% were married couples living together, 15.6% had a female householder with no husband present, and 25.7% were non-families. 19.6% of all households were made up of individuals and 9.5% had someone living alone who was 65 years of age or older. The average household size was 2.74 and the average family size was 3.20.

All content from Kiddle encyclopedia articles (including the article images and facts) can be freely used under Attribution-ShareAlike license, unless stated otherwise. Cite this article:
Valley Falls, New York Facts for Kids. Kiddle Encyclopedia.