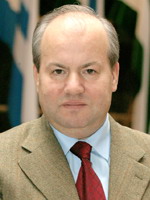 Vasily Nikolayevich Likhachyov (Russian: Василий Николаевич Лихачёв; 5 January 1952 – 8 April 2019) was a Russian politician. He served as the Permanent Representative for Russia to the European Council, and as Deputy Minister of Justice. He was also vice-president of the federal subject of Tatarstan. From 2011 until his death, he was a State Duma deputy for the Communist Party of the Russian Federation. Likhachyov was born in Gorky (now known as Nizhny Novgorod).

All content from Kiddle encyclopedia articles (including the article images and facts) can be freely used under Attribution-ShareAlike license, unless stated otherwise. Cite this article:
Vasily Likhachyov Facts for Kids. Kiddle Encyclopedia.