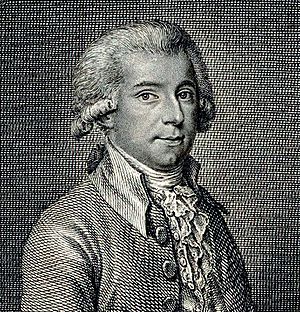 He was born in Valencia, a city in Spain. He studied music in Bologna in Italy. His teacher in Bologna was Giovanni Battista Martini. His first opera was Il tutore burlato. It was performed in Madrid in 1775. Then he went to Italy. He worked as a composer for the Teatro di San Carlo in Naples from 1777 to 1785. Then he moved to Vienna in Austria. His operas in Vienna had much success. In 1788 Catherine the Great, the Empress of Russia, invited him to work for her. In Russia he wrote more operas and ballets. They were performed in the Empress's theater in Saint Petersburg. Martín y Soler died in Saint Petersburg.

All content from Kiddle encyclopedia articles (including the article images and facts) can be freely used under Attribution-ShareAlike license, unless stated otherwise. Cite this article:
Vicente Martín y Soler Facts for Kids. Kiddle Encyclopedia.