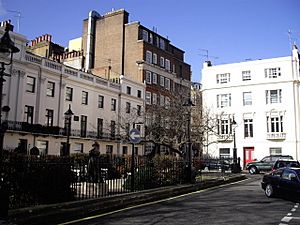 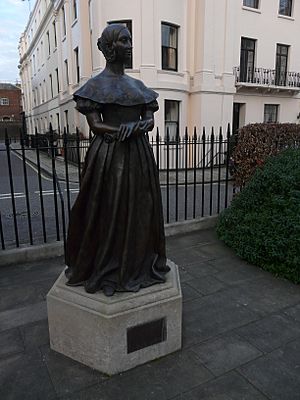 The square comprises about 25 residential houses, which are all Grade 2* listed as particularly important buildings of more than special interest. These are five-storey stucco-fronted properties designed by the architect Sir Matthew Wyatt (1805-1886), a member of the Wyatt family who was the son of sculptor Matthew Cotes Wyatt and the grandson of James Wyatt. The houses were constructed in 1838-40 to celebrate the beginning of Queen Victoria's reign.

Most of the houses comprising Victoria Square are now held as freeholds, having been purchased from the Grosvenor Estate. The square lies within the Grosvenor Belgravia Estate Management Scheme, approved by the High Court in 1973 under section 19 of the Leasehold Reform Act 1967, the purpose of which is to preserve the appearance of the Belgravia area.

The central square was recently renovated after residents contributed to a six figure sum towards the project. A statue of the young Queen Victoria by the artist Catherine Anne Laugel was specially commissioned and was installed in the square in 2007.

In 1991, the square was used for the filming of the Merchant Ivory Productions adaptation Howards End (film).

All content from Kiddle encyclopedia articles (including the article images and facts) can be freely used under Attribution-ShareAlike license, unless stated otherwise. Cite this article:
Victoria Square, London Facts for Kids. Kiddle Encyclopedia.