Victory Park is a master planned development northwest of downtown Dallas, Texas (USA) and north of Spur 366 (Woodall Rodgers Freeway). It is along Interstate 35E, part of the Stemmons Corridor and Uptown.

Victory Park was developed by Ross Perot, Jr., son of billionaire tycoon Ross Perot, who was a majority owner of the Dallas Mavericks NBA basketball team. Perot envisioned Victory Park as an "urban lifestyle destination." Anchored by the American Airlines Center, home of the Mavericks, the entire development was planned at a very detailed level by its developers.

The development has been criticized as being a "collection of imposing hyper-modern monumental structures, high-end chain stores, enormous video screens, expensive restaurants, a sports arena and tons of parking, completely isolated from the rest of the city by a pair of freeways . . . like the schizophrenic dream of some power-hungry capitalist technocrat." However, other journalists have countered this criticism of New Urbanist principles, citing that developments like Victory Park build on a classic, centuries old formula and "are not a quick fix but the slow weaving together of smart, sometimes big, often small, urban solutions" to create viable and enduring community destinations. 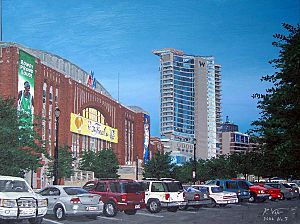 The American Airlines Center: Home of the Dallas Mavericks and Dallas Stars, was the first tenant located in Victory Park. The facility opened in July 2001. It is located at 2500 Victory Avenue.

The W Dallas Victory Hotel and Residences: The 33-story hotel was the first W Hotel to be built in Texas and was completed in late summer of 2006. The hotel includes both guest rooms and condominium properties and houses a Bliss Spa; The W Dallas-Victory, which broke ground on 15 April 2004, is located at 2440 Victory Park Lane.

Plaza Towers : office towers bordering AT&T Plaza, with the secondary 'window to the world' studio for WFAA opening with the building in 2007. In 2012, Cumulus Media relocated their local radio stations (KLIF (AM), KLIF-FM, KPLX, KSCS, KTCK AM/FM, and WBAP) here.

One Victory Park: A large office building across the street from the American Airlines Center and the W Hotel; houses the Dallas office of Big 4 accounting firm Ernst & Young, corporate headquarters for PlainsCapital Bank, and the Dallas offices of Haynes and Boone. The buildings ground level features a 9,600 sq ft (890 m2). Balducci's, a luxury gourmet grocer, Lucy Boutique and a Starbucks. This building features an environmentally friendly underfloor air system. Conditioned air for the occupants is provided by raised floor custom air handling units located in the tenant space that delivers 62 degree air into a raised access floor plenum. This underfloor air system provides users with the ability to control their own space temperature as well as improving the ventilation effectiveness. When building churn occurs, workstation moves can be performed easier with lower cost and less product waste.

Perot Museum of Nature and Science: Thom Mayne-designed museum dedicated to science, nature and the environment. 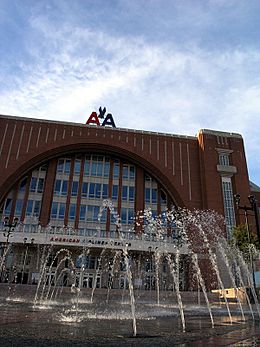 All content from Kiddle encyclopedia articles (including the article images and facts) can be freely used under Attribution-ShareAlike license, unless stated otherwise. Cite this article:
Victory Park, Dallas Facts for Kids. Kiddle Encyclopedia.