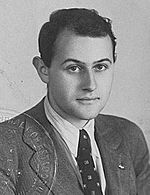 Vilém Flusser (May 12, 1920 – November 27, 1991) was a Brazilian Czech-born philosopher, writer and journalist. He lived for a long period in São Paulo (where he became a Brazilian citizen) and later in France, and his works are written in many different languages.

His early work was marked by discussion of the thought of Martin Heidegger, and by the influence of existentialism and phenomenology. Phenomenology would play a major role in the transition to the later phase of his work, in which he turned his attention to the philosophy of communication and of artistic production. He contributed to the dichotomy in history: the period of image worship, and period of text worship, with deviations consequently into idolatry and "textolatry".

Flusser was born in 1920 in Prague, Czechoslovakia into a family of Jewish intellectuals. His father, Gustav Flusser, studied mathematics and physics (under Albert Einstein among others). Flusser attended German and Czech primary schools and later a German grammar school.

In 1938, Flusser started to study philosophy at the Juridical Faculty of the Charles University in Prague. In 1939, shortly after the Nazi occupation, Flusser emigrated to London (with Edith Barth, his later wife, and her parents) to continue his studies for one term at the London School of Economics and Political Science. Vilém Flusser lost all of his family in the German concentration camps: his father died in Buchenwald in 1940; his grandparents, his mother and his sister were brought to Auschwitz and later to Theresienstadt where they were killed. The next year, he emigrated to Brazil, living both in São Paulo and Rio de Janeiro. He started working at a Czech import/export company and then at Stabivolt, a manufacturer of radios and transistors.

In 1960 he started to collaborate with the Brazilian Institute for Philosophy (IBF) in São Paulo and published in the Revista Brasileira de Filosofia; by these means he seriously approached the Brazilian intellectual community. During that decade he published and taught at several schools in São Paulo, being Lecturer for Philosophy of Science at the Escola Politécnica of the University of São Paulo and Professor of Philosophy of Communication at the Escola Dramática and the Escola Superior de Cinema in São Paulo. He also participated actively in the arts, collaborating with the Bienal de São Paulo, among other cultural events.

Beginning in the 1950s he taught philosophy and worked as a journalist, before publishing his first book Língua e realidade (Language and Reality) in 1963. In 1972 he decided to leave Brazil. Some say it was because it was becoming difficult to publish because of the military regime. Others dispute this reason, since his work on communication and language did not threaten the military. In 1970, when a reform took place at the University of São Paulo by the Brazilian military government, all Lecturers of Philosophy (members of the Department of Philosophy) were dismissed. Flusser, who taught at the Engineering School (Escola Politécnica), had to leave the university as well. At first, he immigrated to the North of Italy (Tyrol). Then, he lived in both Germany and the South of France (Aix-en-Provence). To the end of his life, he was quite active writing and giving lectures around media theory and working with new topics (Philosophy of Photography, Technical Images, etc.). He died in 1991 in a car accident near the Czech–German border, while trying to visit his native city, Prague, to give a lecture.

Vilém Flusser is the cousin of David Flusser.

Flusser's essays are short, provocative and lucid, with a resemblance to the style of journalistic articles. Critics have noted he is less a 'systematic' thinker than a 'dialogic' one, purposefully eclectic and provocative (Cubitt 2004). However, his early books, written in the 1960s, primarily in Portuguese, and published in Brazil, have a slightly different style.

Flusser's writings relate to each other, however, which means that he intensively works over certain topics and dissects them into a number of brief essays. His main topics of interest were: epistemology, ethics, aesthetics, ontology, language philosophy, semiotics, philosophy of science, the history of Western culture, the philosophy of religion, the history of symbolic language, technology, writing, the technical image, photography, migration, media and literature, and, especially in his later years, the philosophy of communication and of artistic production.

His writings reflect his wandering life: although the majority of his work was written in German and Portuguese, he also wrote in English and French, with scarce translation to other languages. Because Flusser's writings in different languages are dispersed in the form of books, articles or sections of books, his work as a media philosopher and cultural theorist is only now becoming more widely known. The first book by Flusser to be published in English was Towards a Philosophy of Photography in 1984 by European Photography, which was his own translation of the work. The Shape of Things, was published in London in 1999 and was followed by a new translation of Towards a Philosophy of Photography.

Flusser's archives have been held by the Academy of Media Arts in Cologne and are currently housed at the Berlin University of the Arts.

Writing about photography in the 1970s and 80s, in the face of the early worldwide impact of computer technologies, Flusser argued that the photograph was the first in a number of technical image forms to have fundamentally changed the way in which the world is seen. Historically, the importance of photography had been that it introduced nothing less than a new epoch: 'The invention of photography constitutes a break in history that can only be understood in comparison to that other historical break constituted by the invention of linear writing.'

Whereas ideas might previously have been interpreted in terms of their written form, photography heralded new forms of perceptual experience and knowledge. As Flusser Archive Supervisor Claudia Becker describes, "For Flusser, photography is not only a reproductive imaging technology, it is a dominant cultural technique through which reality is constituted and understood". In this context, Flusser argued that photographs have to be understood in strict separation from 'pre-technical image forms'. For example, he contrasted them to paintings which he described as images that can be sensibly 'decoded', because the viewer is able to interpret what he or she sees as more or less direct signs of what the painter intended. By contrast, even though photography produces images that seem to be 'faithful reproductions' of objects and events they cannot be so directly 'decoded'. The crux of this difference stems, for Flusser, from the fact that photographs are produced through the operations of an apparatus. And the photographic apparatus operates in ways that are not immediately known or shaped by its operator. For example, he described the act of photographing as follows:

The photographer's gesture as the search for a viewpoint onto a scene takes place within the possibilities offered by the apparatus. The photographer moves within specific categories of space and time regarding the scene: proximity and distance, bird- and worm's-eye views, frontal- and side-views, short or long exposures, etc. The Gestalt of space–time surrounding the scene is prefigured for the photographer by the categories of his camera. These categories are an a priori for him. He must 'decide' within them: he must press the trigger.

Roughly put, the person using a camera might think that they are operating its controls to produce a picture that shows the world the way they want it to be seen, but it is the pre-programmed character of the camera that sets the parameters of this act and it is the apparatus that shapes the meaning of the resulting image. Given the central role of photography to almost all aspects of contemporary life, the programmed character of the photographic apparatus shapes the experience of looking at and interpreting photographs as well as most of the cultural contexts in which we do so.

Flusser developed a lexicon of terms that have proven influential and that continue to be useful for thinking about contemporary photography, digital imaging technologies and their online uses. These include: the 'apparatus' (a tool that changes the meaning of the world in contrast to what he calls mechanical tools that work to change the world itself); the 'functionary' (the photographer or operator of the camera who is bound by the rules it sets); the 'programme' (a 'system in which chance becomes necessity' and a game 'in which every virtuality, even the least probable, will be realized of necessity if the game is played for a sufficiently long time'); the 'technical image' (the first example of which is the photograph, with its particular kind of significant surface that looks like a traditional image but harbours encoded and obscure concepts that cannot be 'immediately' deciphered). While Flusser did write a number of short essays on the work of specific photographers, his major focus was the critical and philosophical need to understand late 20th-century media culture and the emergent possibilities and threats presented by the larger forces at work in an increasingly technical and automated world.

Concept of Home and Homelessness

Flusser was deeply influenced by the loss of his native Prague, and his relocations throughout his life which can be seen in his writings and causing him to proclaim his homelessness, "because there are so many homelands that make their home in me". His personal biography was particularly helpful for his studies in interpersonal communication and how to facilitate it. Communication, which are the gaps between different positions, is part of a cultural phenomenon relying on unconsciously learnt patterns at home. Language therein is a major influence on ones thinking. Flusser asked what are the consequences of the loss of one's home and traditional connections? He differentiated between the two meanings of home originating in the German language, "Heimat" understood as a homeland and "Wohnung" understood as in house, and argued that home cannot be understood as an eternal value transcending time and space. A person is bound to its "Heimat" through invisible threads such as connections to people, tradition and language, which all lay beyond the consciousness. Only when a person is removed from their home they become aware of the ties which reveal themselves as unconscious judgements. These unconscious "habits prevent bits of information from being perceived" and make the habitual environment comfortable and therefore pretty. For Flusser this substantiates the "love for a fatherland".

The homeless person must not only consciously learn the habits of a new home but also must forget them again as if they become conscious, these habits reveal themselves as banal, threatening to expose the true nature of the home of the natives. The developing polemic dialog distinguishes between the "ugly stranger" who can unveil the truth (Aletheia) and the "beautiful native" who fears the otherness as it threatens their habit. Flusser used his experience in Brazil during a time of massive immigration to demonstrate the possibility to set oneself free of the unconscious habits of the homeland to form new voluntary connections which lead up to the creation of a new homeland.

However, opposed to the homeland one can free himself off, the home understood as in house is a necessary part of human existence. It gives a person the mental ability to process information as it divides the sphere of existence into habit or home and unusual or new information. The habitual environment is a prerequisite to recognize the unusual which comes into one's home. Flusser refers in this regard to Hegel's dialectic analysis between home and the unusual or generally speaking of consciousness.

All content from Kiddle encyclopedia articles (including the article images and facts) can be freely used under Attribution-ShareAlike license, unless stated otherwise. Cite this article:
Vilém Flusser Facts for Kids. Kiddle Encyclopedia.