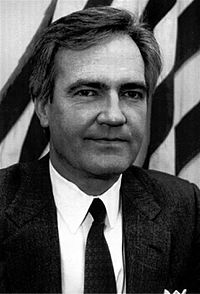 Vincent Walker Foster Jr. (January 15, 1945 – July 20, 1993) was an American attorney. He served as Deputy White House Counsel for the first six months of President Bill Clinton's presidency until his death in July 1993. Foster was born in Hope, Arkansas.

He married Elizabeth Braden in 1968. The couple had three children.

He was found dead at a federal park in McLean, Virginia, at the age of 45.

All content from Kiddle encyclopedia articles (including the article images and facts) can be freely used under Attribution-ShareAlike license, unless stated otherwise. Cite this article:
Vince Foster Facts for Kids. Kiddle Encyclopedia.