Vinicius and Tom facts for kids

A Brazilian company called Birdo made the mascots. The Olympic organizers only wanted mascots made by Brazilian companies. The organizers chose Birdo's mascots in August 2013, and they showed them to the public on 23 November 2014, but the mascots did not have names yet at that time. The organizers asked the public to choose names for them. The public chose to name the mascots after Vinicius de Moraes and Tom Jobim. Vinicius de Moraes and Tom Jobim wrote the song "The Girl from Ipanema".

The Olympic organizers made a children's television series about the mascots. The Rio organizers also made many toys and other merchandise of the mascots. The organizers gave wrestling coaches soft dolls of Vinicius. If the coaches did not like a referee's call, then they would throw the doll into the ring. Many people thought that this was funny. Paralympic medalists got special dolls of Tom. They were special because the leaves on Tom's head were the same color as their medals. Some observers liked how the mascots looked. Others thought they looked strange.

The organizers of the 2016 Summer Olympics (Rio 2016) started to ask for mascot designs in November 2012. The events were going to be held in Rio de Janeiro, Brazil, so the Olympic organizers only wanted designs from Brazilian companies. Directors from the Brazilian film festival Anima Mundi helped the Rio 2016 organizers choose the mascots.

A group of judges chose the final mascots in August 2013. The group included members of the Rio 2016 organizers, the International Olympic Committee, the Brazilian Olympic Committee, and the Brazilian Paralympic Committee, and people who worked in animation, illustration, advertising and market research. All of the judges agreed to choose a set of two mascots, one for the Olympic Games and the other for the Paralympic Games. A São Paulo-based animation company named Birdo created these mascots. Birdo and the organizers began to create content featuring the mascots, working in secrecy.

Use of Vinicius in Olympic wrestling events 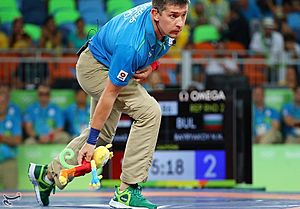 A referee in men's Greco-Roman 85 kg wrestling picks up a plush doll of Vinicius, thrown by coaches into the ring at Rio 2016 to challenge referee calls.

In the sport of wrestling, coaches may challenge a referee's call by throwing a "soft object" into the ring. This is normally a foam brick, but wrestling rules do not exactly say what the soft object must be. The Rio 2016 organizers gave wrestling coaches soft plush dolls of Vinicius to throw into the ring when they wished to challenge a call. One wrestler's coach got a Vinicius doll with a red shirt, while the opponent's coach got one with a blue shirt.

Many people thought this was funny. NBC Sports commentators started to call Vinicius "the challenge mascot". Dustin Nelson, a news writer for the website Thrillist, wrote that the mascot took "a little of the anger out of a challenge". Jason Bryant, the official commentator for wrestling at the 2016 Olympics, was surprised to see this at the Olympics because there is a lot of emphasis on "protocol" at the Olympics. However, Byrant eventually said that it does not matter what the challenge object is if it has cultural importance to the location of the competition. Coach Mike Malinconico argued that the Olympic organizers should not have done this. 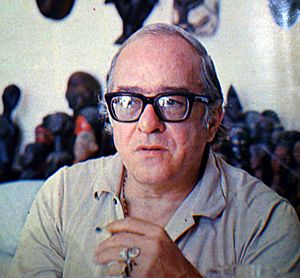 Vinicius is the Olympic mascot, and he is named after Brazilian musician Vinicius de Moraes. Vinicius's design represents Brazilian wildlife. The design combines "the agility of cats, sway of monkeys and grace of birds." Vinicius can stretch his arms and legs as long as he wants. His mission is "to spread joy throughout the world and celebrate the friendship that flourishes between people from all over the world" at the Olympic Games.

Tom is the Paralympic mascot, and is he named after Brazilian musician Tom Jobim. Tom's design represents the plants of Brazilian forests. Tom can pull any object out of his head. His mission is "to inspire everybody to use creativity and determination to always reach further and have fun."

Vinicius and Tom "were both born from the joy of Brazilians" after the International Olympic Committee chose Rio de Janeiro to host the 2016 Summer Olympics and Paralympics. The mascots are named after Vinicius de Moraes and Tom Jobim, who co-wrote the 1962 bossa nova song "The Girl from Ipanema".

On 5 August 2015, Cartoon Network Brazil started to broadcast animated short films with the mascots. The series is named Vinicius e Tom – Divertidos por Natureza ("Vinicius and Tom – Fun by Nature" or "Vinicius and Tom – Natural Entertainers"). The series has 32 episodes. Each episode is two minutes long. Divertidos por Natureza is the third television cartoon series based on Olympic mascots. It is also the first cartoon created in the Americas based on Olympic mascots. The show follows Vinicius and Tom as they live in Brazilian forests and cities. The mascots are also sometimes joined by the "Carioca Sisters" (Portuguese: Irmãs Cariocas). The sisters are named Bela, Sol, and Vida.

The series is designed to promote the mascots. Turner Broadcasting System, the owner of Cartoon Network, spent US$750,000 to develop the series. Cartoon Network helped to coproduce the series because it won a competition held by the Rio 2016 organizers to select a collaborator for the series. Brand director Beth Lula said that the mascots "are one of the principal methods of engaging the public with the Games. The cartoon will give them life, reinforcing the emotional link of the public with the event." The series is targeted towards children, but the show's staff said that adults will like it too too. 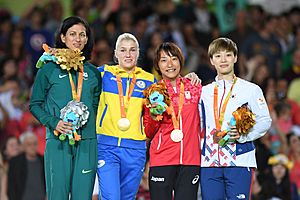 Paralympic medalists in women's 57 kg judo hold plush dolls of Tom, with the leaves on Tom's head colored to correspond with their medals.

The mascots were included among the merchandise of the Rio 2016 Games. Merchandise items ranged in size from a Lego kit to life-size dolls. The organizers gave Paralympic medalists stuffed toys of Tom. They colored the leaves on the dolls' heads in gold, silver, or bronze in order to match with their medals. The Vinicius and Tom Lego kit is the first time that Lego made a commercial version of Olympic mascots. An employee at a Rio 2016 merchandise store said that the mascots were "the most popular thing by far. ... Kids and adults all love them, especially Vinicius, he is the favourite."

The Rio 2016 Organizing Committee thought that the mascots could make up a quarter of merchandise sales in Rio. Overall, merchandise sales were 11 percent higher than what they thought, according to Rio 2016 spokesperson Mario Andrada. The best-selling item was a hat in the shape of Vinicius's head. The second-best-selling item was a pair of Havaianas with a drawing of Vinicius on it.

All content from Kiddle encyclopedia articles (including the article images and facts) can be freely used under Attribution-ShareAlike license, unless stated otherwise. Cite this article:
Vinicius and Tom Facts for Kids. Kiddle Encyclopedia.